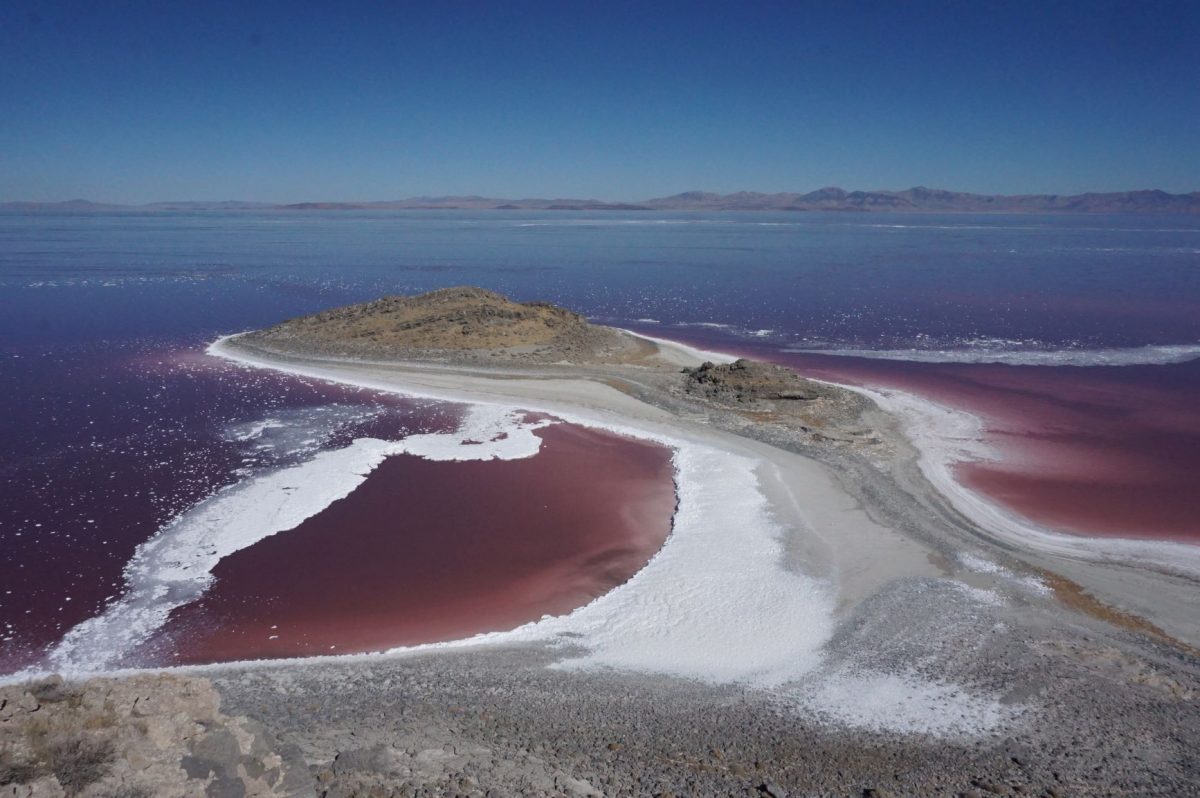 Among the collection of Great Salt Lake Islands, perhaps there is none more prized to visit than the elusive Gunnison Island. Found in the distant North Arm of the Lake, access to the Island has been restricted since the State of Utah took ownership of the Island in the 1980’s, making it a protected pelican rookery. Despite its restricted status, the island has an interesting history than involves the historic Stansbury Expedition, guano mining, an artist hermit and thousands of pelicans.

In October 2018 archaeologists from the Antiquities Section of the Utah Division of State History were invited to participate in the annual flotilla to Gunnison Island with the Utah Division of Wildlife’s (UDWR) Great Salt Lake Ecosystems Project (GSLEP) and the Great Salt Lake Institute (GSLI). Dr. Christopher Merritt and I jumped at the invitation to visit this restricted island to better understand its unique history and archaeology and to contribute to pending Island resource management plans. Transit on GSELP boasts across the autumn lake was surreal amid the pink, foam covered waters of the north arm of the Great Salt Lake. We landed beneath the northern stone prow of the island.

As the other expedition participants spread out across the island to count dead pelicans from the past breeding season, Chris and I were focused on several goals to better understand the history of the island. First, we wanted to record the remains of the Stansbury Expedition triangulation station that was constructed in 1850 as part of Howard Stansbury and crew’s efforts to map the Great Salt Lake. We had reports the station was still in excellent condition due to a lack of public visitation and lack of vandalism. We found the station great condition overlooking the north end of the island, with limited changes noticed since a historic 1930 photograph.

Our second goal was to locate and document any evidence of the historic residence of Mr. Alfred Lambourne. An artist and author, Lambourne took solitary residence on the island in November 1895 hoping to homestead and build a small vineyard. His exploits on the Island are documented in his book, Our Inland Sea: the Story of a Homesteader, from 1909. The book is a fun read chronicling his time and describes the home he built on the island and his efforts to terrace the land for his vineyard. Identifying his residence and any other remains of this hermitage would help confirm certain historical aspects to the island. Thanks to her keen eyes and extensive time on the island, Jaimi Butler from GSLI pointed us to a pair of curious upright rock slabs on the shores of one of the eastern bays. An extensive inspection of the immediate area by Dr. Merritt ensued and the features seemed to strongly match Lambourne’s 1909 description of his residence. Beyond the outline of a small building limited other evidence of Mr. Lambourne’s sojourn was found.

During Alfred Lambourne’s time on the island he notes the unexpected visitation a small group of guano miners in winter 1896. These miners were focused on the extraction of century’s worth of bird guano to be sold as fertilizer to distant farmers. While perhaps annoyed by the surprise visit, Lambourne reports taking a liking to these ‘guano sifters’ and describes the guano operation and also their residence on the island.  Our third goal was to identify and record any remaining evidence of their residence and operations. Luckily GSLEP lead biologist John Luft pointed us to the remains of a 1980’s UDWR shack that was reportedly built on the remains of the guano sifters hut. And sure enough, below the rotting floor boards of the UDWR shack we found the outline of a historic structure that matched Lambourne’s description from his 1909 book.

Our time on Gunnison Island was pressed and limited but we further managed to quickly explore other portions of the Island in hopes of understanding pre-contact use of the island by native peoples and other historic use. No prehistoric archaeological sites were located but we hope to return in coming years to more thoroughly inventory the island in order to contribute to our understanding of the use of the island in both historic and pre-contact times. A more thorough discussion of our findings on the island, including our quick jaunt over to Cub Island, can be found in the Winter 2018 Utah Historical Quarterly.