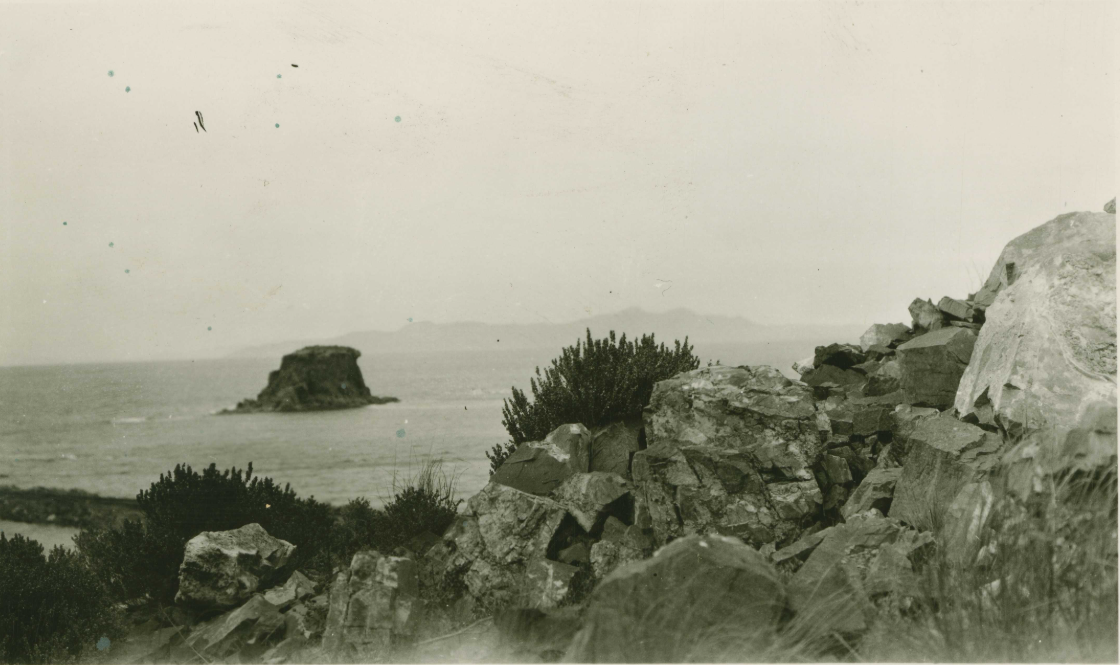 It is unclear when the first human laid eyes upon the geological oddity now called “Black Rock” on the southern shores of the Great Salt Lake. But it was likely a Native American from the Paleoindian or Early Archaic period, evidence of whom were discovered nearby at the Black Rock Cave by University of Utah archaeologists back in the 1930s and 1960s. Far earlier than humans, the Black Rock likely rolled off the Oquirrh Mountains during the time of Lake Bonneville and landed upon the bottom of this massive inland sea. As Lake Bonneville drained, leaving behind its briny progeny, the Black Rock emerged from the depths over 13,000 years ago. Depending on the lake levels, which fluctuated widely over the last 170 years of documented history, the Black Rock is either a peninsula extending from the south shore or an island several hundred feet out into the Great Salt Lake. Historic photos from the 1860s even through the 1880s show the Black Rock as well beyond the shoreline, but by the 1930s it became a fixture of dry land.

Doubtless, Native Americans traveled by the Black Rock, but we have not yet been able to identify any stories from the tribes who called this their ancestral territory at the arrival of European Americans, namely the Gosiute, Ute, and Shoshone. The first European-Americans to witness the Black Rock, though it did not have its moniker yet, were members of the Bryant-Russell party. This was the first westward emigrant party that followed the Hastings Cutoff of the California Trail; the more famous Donner Party followed a few months behind.

For the story at hand, July 27, 1847 was a momentous day for the Black Rock. On that hot summer day the geological feature received its English name. Only three days after arriving in the Salt Lake Valley significant members of the Church of Jesus Christ of Latter-day under the direction of President Brigham Young headed the 15 miles west to visit the Black Rock. In this party accompanying Young was Heber C. Kimball, Willard Richards, Orson Pratt, Erastus Snow, Wilford Woodruff and George A. Smith, and they all participated in the first recreational bathing in the Great Salt Lake in recorded history.

A few years later, travel guide writer Fitz Ludlow described the scene: “A fifteen minute [horse] ride, and Black Rock rose grim and ugly, like the foundation of some ruined tower…we had expected a grim and desolate landscape; a sullen waste of brine, stagnating along low ready shores, black as Acheron, gloomy as the sepulcher of Sodom. Never had Nature a greater surprise for us. The view is one of the most charming which could be imagined.” (Ludlow 1870:385). Many Utah artists agreed, as the Black Rock became a favored subject of landscape painters and lithographers such as Alfred Lambourne, James Harwood Taylor, G.M. Ottinger, Waldo Midgley, and Albert Tissandier. Speaking to the significance of the Black Rock, the first piece of art purchased by Alice Merrill Horne for the State of Utah’s collection in 1898 was Harwood’s 1890 piece, “Black Rock Great Salt Lake”.

Over the next few decades, Black Rock witnessed many more firsts in Utah history. The first 4th of July celebration outside downtown Salt Lake City occurred at the Black Rock in 1851, the first formal salt reduction works as managed at the massive stone home of Heber C. Kimball, the first bathing resort with over 25 bathing houses and a hotel by the mid-1860s, and the first location of a measuring gauge to monitor the Great Salt Lake water levels. Even Captain Howard Stansbury erected a triangulation station on top of the Black Rock in 1850, in his efforts to complete the most detailed survey of the Great Salt Lake ever accomplished at this time.

Heber C. Kimball built a large stone home at Black Rock by 1860, and about the same time he offered up his property to visitors to go enjoy a swim in the Great Salt Lake. By the mid-1870s there was a formal resort on the property though by 1880 it had fallen into disrepair. As a similar story with all of the Great Salt Lake bathing resorts, the fortunes of Black Rock went up and down dependent on the factors of economy, lake level, and changing interests in recreation. Alonzo E. Hyde and David John Taylor acquired the Black Rock Resort in 1880 and expanded the resort to include 100 bath houses, a bowery for picnics, wooden walkways, and even 21’ high swings. Declining interest and revenue after serious competition from the newly opened Saltair Resort hurt Black Rock, and the resort fell into disrepair. By 1907, new interests formed to build the resort up and it enjoyed variable through the Great Depression and even into World War 2. The late 1940s through the 1950s were a high season for the Resort, with receding lake levels fortuitously creating ample beach lands to the north and east of the main Black Rock.

Waning interest in the bathing recreation of the Great Salt Lake slowed revenue, and the drying up of Black Rock’s nearby natural freshwater spring signaled the final death of the Black Rock Resort by the mid-1960s. After the last lease ended the Black Rock and its surrounding property reverted back to the State of Utah for care and management, and is now managed by the Utah Division of Forestry, Fire and State Lands as State Sovereign Lands. Over the last twenty years bird watching, sunset photography, and illegal uses such as graffiti and bonfires have been the normal use of the site. In 2020, private and public partners are coming together to clean the graffiti from the Black Rock and make it once again a scenic place on the shores of the Great Salt Lake.