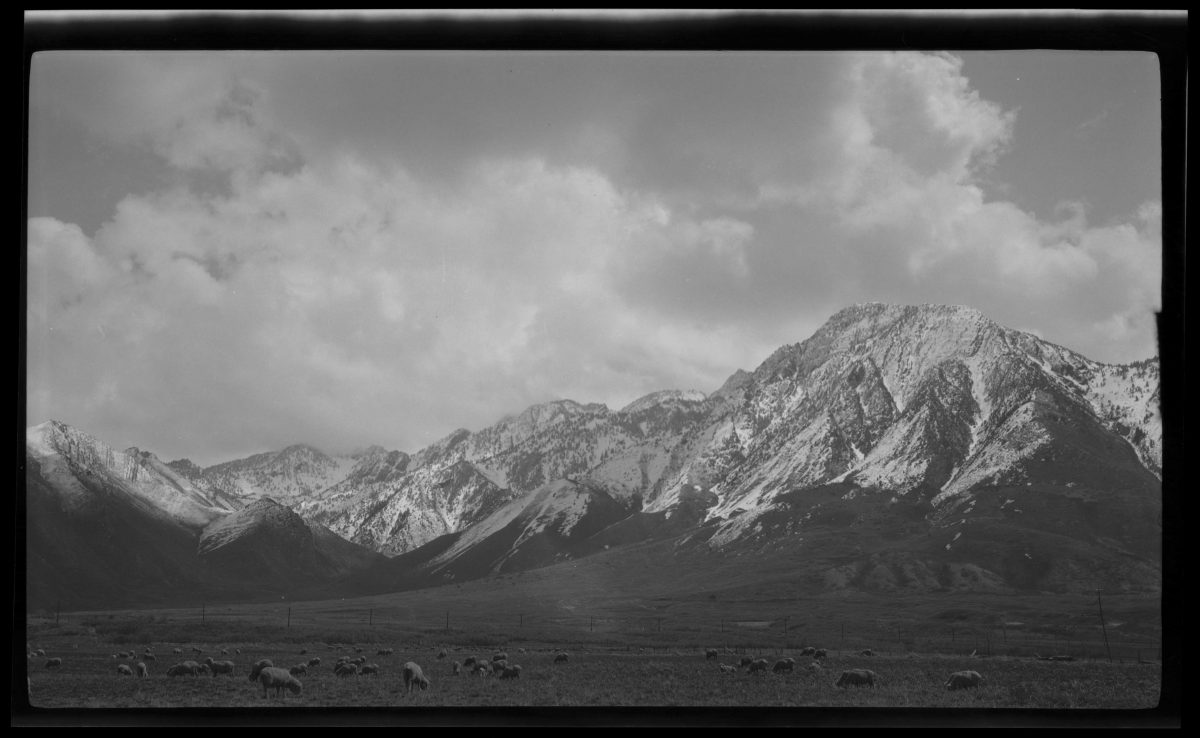 Editors’ note: This is part of a series of short essays designed to understand historical markers, monuments, and place names in historical and contemporary perspective.

The stories behind names given to the mountains, valleys, and streams in Utah are often a curiosity for the inquisitive among us. These name surround and guide us as we navigate through a geographically complex state. The origins and background for many names are lost to history. For others, their source may be readily apparent. In certain cases, these names reflect the values, customs, and languages of a by-gone era.

In Utah, the majority of geographic names take little imagination to understand where they came from. Most were handed down from the colonialism of white settlement. Relatively few geographic names originally used by the Indigenous peoples who reside in our state made it into our modern geographic lexicon. (Thankfully, an atlas of indigenous place names is currently being created by the American West Center at the University of Utah.) Instead of adopting existing names, Mormon pioneers and other Euro-American settlers generally assigned new names as if the land were a clean canvas. Their new names ranged from imaginative, to religious, to practical, with many remaining with us today.

How names became a part of the lexicon was as complex as the names themselves. Generally, a name developed organically as people moved through and lived in the landscape. That today a physical location is named or renamed through an official process will likely surprise many. The U.S. Board on Geographic Names (BGN), originally established 1890, manages the process to officially name, or change the name of any a geographic location on federal land. BGN strictly focuses on natural features, with highways, towns, cities, or most other human-made features being out of their jurisdiction. Private land is also out of their jurisdiction. A private landowners can name their geographic features whatever they desire, but for official recognition on state or federal maps and databases, they too must go through the BGN process.

This process follows guidance set forth by the BGN in their Principles, Policies, and Procedures document. This document addresses such issues as whether you can name a canyon after your favorite beverage (not likely) or whether dying on a mountain gives leverage for naming it after the deceased (it doesn’t).

While the BGN owns the process, they don’t own the names. They do not propose names or solicit for names. The board’s primary function is to review officially submitted name proposals. A federal body functioning under the U.S. Department of Interior, BGN consists of representatives from various federal agencies. Among other considerations when reviewing proposals, board members consider support from local communities, local usage, adherence to the PPP guidance, and support from the relevant State Names Authority.

In Utah, the State Names Authority is the Utah Committee on Geographic Names, which was originally created by a governor’s Executive Order in the 1970s. The Committee’s primary task is to review newly proposed geographic names submitted to the BGN, and to provide a recommendation as a more local voice. It functions similarly to the BGN in that it only reacts to new proposals. As part of the Committee’s review, we do background research and reach out to pertinent local communities, land managers, and local tribes. The Committee is currently comprised of a mix of geographers, historians, a geologist, an archaeologist, and interested members of the public, from various state and federal agencies, non-governmental organizations, and the private sector. Committee members are appointed by the governor, and anyone can apply for membership.

Unfortunately, geographic names can harbor cultural remnants of racism or past prejudice, intentional or otherwise. In 1962, Secretary of the Interior Steward Udall took sweeping action to remove a pejorative term for African Americans from all geographic place names in the United States, replacing it with the term “negro.” While this term was more acceptable for use fifty years ago, it is now a controversial inclusion on the geographic names rolls.

After years of local controversy, in 2017, following a BGN renaming proposal from a local Moab resident, a prominent canyon north of Moab named Negro Bill Canyon was renamed through the BGN process to Grandstaff Canyon. The new name honors the canyon’s 1880s resident, Mr. William Grandstaff, who was Black. Many worried the proposed name change would erase the unique history of a Black man residing in rural Utah in the late nineteenth century. Opinions provided to the BGN through the name-changing process all sought to honor Mr. Grandstaff—but differed in how that honor should be administratively codified in an official geographic name.

In its decision, BGN weighed conflicting opinions regarding the offensive nature of the name from the NAACP and the Utah Martin Luther King Jr. Human Rights Commission. They also took into account opinions from the land managing agency (the Bureau of Land Management) and the Grand County Council, along with a recommendation from the Utah Committee on Geographic Names. While the name of this prominent canyon is resolved for now through a BGN decision, at least six additional geographic features in Utah still retain a name that includes “negro.”

Many other derogatory or potentially derogatory names are still found on geographic features in Utah. Interest over the usage of the term “squaw” in Utah place names has grown over the past decades, especially regarding the prominent Squaw Peak that presides over the city of Provo. Officially known in the BGN’s database as Squaw Mountain, the name reportedly references a folktale of an American Indian maiden who jumped to her death from the mountain.

Despite years of interest, the BGN has yet to receive an official proposal from an interested individual or party to rename the mountain. Given the controversial nature of both the current name and potential efforts to rename the feature, it is hoped that the party who finally proposes a new name for the feature will take time to gather local support for a new name and also work with local tribes for their support. Given the proximity to one of Utah’s largest cities, a name change to a beloved mountain is sure to garner significant interest and controversy. The Utah Committee on Geographic Names has received hints over the years of individuals or groups working on a proposed name change, but no new name has officially been proposed through the BGN.

In the 2021 Utah State Legislative Session, Senator Jan Iwamoto introduced legislation to empower the Utah Division of Indian Affairs (UDIA) to assist interested parties in preparing BGN proposals to rename geographic features that contain names offensive to American Indians. UDIA would assist by gathering opinions and support from local tribes and assuring that all pertinent information is provided to the BGN in a renaming proposal. The Utah Committee on Geographic Names is tasked with supporting the UDIA in this effort and is eager to be involved. The bill was supported by the State Legislature and eventually signed into law by Governor Cox. Beyond Utah County’s Squaw Mountain, Utah has over fifty other geographic features that include the name “squaw.”

In November 2021 U.S. Department of Interior Secretary Deb Haaland released Secretarial Order 3404, which formally identified the term “squaw” as derogatory and created a federal task force to find replacement names for geographic features on federal land that include the term. Further guidance released by the task force in late February 2022 moved to replace the derogatory term with “sq___” for all official related communication. The BGN has compiled a list of “sq___” names in the United States. A second Secretarial Order (3405) created a federal advisory committee to gather, review, and provide recommendations for other derogatory geographic names on federal land. At this point the Utah Committee on Geographic Names is still learning about the task force and the advisory committee, but we do know the task force is functioning outside of the BGN process.

On February 23, 2022, the U.S. Geological Survey, the parent agency of the BGN, posted a notice to the Federal Register linking to a list of proposed “sq___” replacement names across the nation as defined by the 3404 task force. USGS identified replacement name “candidates” by conducting “a search of nearby named geographic features.” From the provided task force list, the first candidate names for several prominent “sq___” named features in Utah are:

For each proposed name, five candidates are provided. Comments regarding the proposed names, and a public solicitation for additional names outside of the proposed list, are currently being solicited and will be accepted through April 25, 2022, through the Federal Register website. It is assumed that following this comment period, and the subsequent comment review period, action on all of these names will be taken, which means that changed names will be reflected on all federal maps, corresponding documentation, signage, and official federal publications, regardless of continued local usage of the old name. If local groups or tribes do not like the task force’s assigned name, and cannot submit a preferred name by April 25, they can then follow the usual BGN to propose a name change and initiate a BGN name proposal review.

While the Department of Interior works through their newly created processes to address derogatory geographic names, any interested individual or group can still propose to rename a geographic name outside of their process. A link to a PDF name-proposal form and further background information on the process can be found here. Well prepared proposals will follow the guidance put forth in the PPP document referenced above, gather information on local usage (if any), and document local support (if any).

For proposals that seek to rename geographic features that pertain to American Indians, we encourage you to reach out to the UDIA. They are well equipped to coordinate with local tribes or those with ancestral ties to an area in question and are tasked with facilitating such name proposals. Proposals for unnamed geographic locations are also always welcome through the process listed above. Please do your best to follow the guidance listed in the PPP document.

If you’re a geographically curious type, consider exploring the BGN’s database of geographic names. The system allows for a variety of search criteria and also allows downloading of search results into a text file. Unfortunately, for the majority of names in Utah, the names predate the modern BGN process and little or no information is likely available. But you may be surprised at what you find. Turns out there’s a Zion Arrows in addition to the The Narrows in Zion National Park (possibly a GNIS typo?). There’s also at least one Impossible Peak in Utah (at least impossible “by name”). And among the twenty-seven Utah “nipple” names, there’s only one presumably named for a man (Peter). And, finally, exploration shows a favorite Wasatch peak was officially named O’Sullivan Peak in 1978 by the BGN despite local and historic usage (and ongoing current usage) of the name Sunrise Peak. There’s plenty of history and drama held in Utah’s geographic names for those who are interested—dive in!

Arie Leeflang has served as the Secretary for the Utah Committee on Geographic Names for the past thirteen years. He works as a professional archaeologist and was raised on the geographic tales and folklore of Utah.