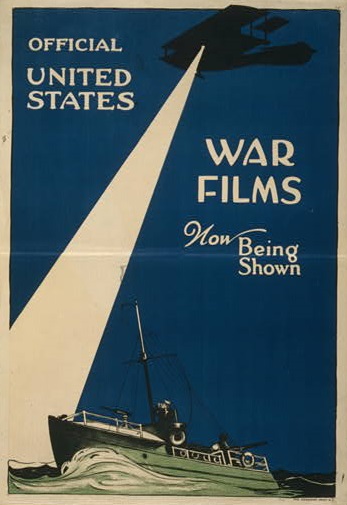 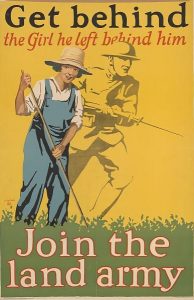 In researching his UHQ article “Utah and World War I,” Allan Kent Powell found material that was too good to pass up but too wordy for print. Two such documents appear below, with editorial comments in italics.

A revealing account of the work and bureaucracy associated with World War I–era victory gardens is found in a letter written to John A. Widstoe, in his capacity as chairman of the Committee on Food Supply and Conservation, by N. P. Nilsson and Paul P. Ashworth, who worked with youth in the Pioneer Stake of the Church of Jesus Christ of Latter-day Saints, on Salt Lake City’s west side. The letter reads:

The undersigned, representing the Boy Scouts of Pioneer Stake, report as follows on the five-acre war garden cultivated by them during the past summer.

To comply with the Boy Scouts slogan “Every Scout to feed a Soldier,” and with the urgent need of raising and conserving food stuffs in these critical times, we decided that we would endeavor to “do our bit,” and raise food to be distributed among the poor in our part of the City. Accordingly, we secured, through the courtesy of Mr. Heber S. Cutler, a fifteen acre tract of splendid land on Second West below Ninth South. This tract was turned over to your Committee. We decided to plant five acres of this tract, four acres to potatoes and one to beans if water could be obtained. We discussed with Mr. Newman the question of obtaining water, and were assured that sufficient water would be supplied, if necessary from the fire hydrants. The land was plowed and harrowed under the direction of Mr. Steiner of your Committee.

We then went to your seed depot to obtain the necessary seed, and were amazed and disconcerted to find that in spite of the literature published and widely distributed by your Committee stating that seed would be distributed gratis to charitable organization, we would have to pay the prevailing market price for seed, and that in order to secure same it would be necessary to have some responsible person sign a note for the full cost price. The season was getting late, the boys whom we had organized were getting impatient, the cause was a good one, and therefore immediate action was necessary. Accordingly we appealed to that splendid gentleman and good citizen Mr. Sylvester Q. Cannon, and he signed the note. Thus we were able to secure seed.

In due time the crop came up and with it a glorious crop of weeds. We proceeded immediately to combat the latter. Help became scarce due (1) to three of the four scout masters leaving the City, causing disorganization among their troops, and (2) the unusual demand by the farmers for boys to assist with their crops. We appealed to the Stake Board of Y.M.M.I.A. and to the men in that vicinity, and these, together with the boys available, soon had the weeds under control. We purchased a horse cultivator, and through the courtesy of Ex Governor T. C. Cutler, Bishop Worthen, and Mr. Hanger, we obtained horses with which to cultivate the crop.

About this time the water situation became acute. We appealed repeatedly to the City Water Works Dept. but Mr. Newman was out of town, and his subordinates felt that they could not act. Upon Mr. Newman’s return he was consulted, and immediately sent a man down to water the crop with the fire hose. The mains, however, were too small to take care of such a large tract, and only a few rows were watered. A ditch from the old 10th South canal was cleaned out and a gasoline driven pump installed; this work being done under the direction of Mr. Newman. The pumping equipment was so old and in such bad repair that about the time the ditch was full of water and the water had reached the field, the engine would break down. We, therefore, did not get more than one half acre watered from this source. The expense of operating this “antediluvian” equipment was prohibitive, and so it was shut down (if “shut down” is a proper expression to use in reference to an equipment which required no “shutting down” in order to stop.)

We were still without water, Mr. Newman had already exceeded the amount granted to his Department for war garden purposes, and our crop was burning up. We consulted Mr. Heber M. Wells of the Street Department and asked him to place a dam in the canal at the point where the pump was installed. This was done the day following, and we were able, by working day and night, to water the crop. The water had come entirely too late to save the beans, so that half-acre was a complete failure. The potatoes, also, were in bad shape but by hard work we were able to partially save the crop.

For harvesting we purchased a potato digger. Mr. Mathews of your Committee was on the field for a short time when the potatoes were being dug, and can, no doubt, report conditions as he saw them.

The potatoes from the 30th and 4th Ward acres have been sold at $1.25 per hundred, which we consider a good price, considering quality—and the others are being disposed of as rapidly as possible, since we have no storage facilities, and we seriously question the keeping qualities of the crop.

To summarize: First: Our yield was four fold, whereas the seed cost about six times the current market price, so that while the crop was not a financial success, it was a success from the standpoint of increasing the available food supply. Second: That the crop was not sufficient to make the proposition a financial success was due to causes entirely beyond our control, and not in the least on account of our negligence.

In the light of the above report we respectfully ask your Committee to consider the following propositions:

First: We propose that 15% of the proceeds of the entire crop be turned over to the few Boy Scouts who were on the job all summer, (this does not include the undersigned. We expect nothing, and, in fact, are personally standing the cost of cultivator and plow, amounting to $28.00)

Second: We propose that 85% of the proceeds of the entire crop be given to the Bishops of the 30th, 26th, 25th and 4th Wards of Pioneer Stake to be distributed at their discretion to the needy poor.

Third: We propose that you cancel the note for $192.30 being held against us in the name of Sylvester Q. Cannon. 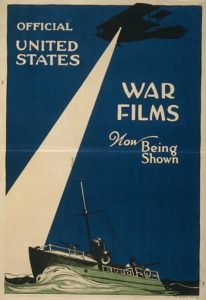 Poster showing an airplane casting a searchlight on the water, circa 1917. (Hegeman Print N.Y. Courtesy Library of Congress.)

Account of Experiences in the United States Forest Service in Utah at the Time of the First World War
Arthur W. Stevens

After the American declaration of war in April 1917, many Utahns became caught up in the fervor of war and imagined that German spies, saboteurs, and aircraft could be found almost everywhere. Arthur W. Stevens, of the U.S. Forest Service in Utah, recalled:

Life became different. A sort of war-hysteria took over. Strange lights were seen in the sky at night, always at some other town. In time it was quite generally accepted that the Germans had a landing field down in Mexico, that they had super-pilots who could navigate at night and super-planes that could carry enough fuel to fly from Mexico into the United States and back again. No sound of motor was ever reported, so the planes must have operated on some secret, soundless power. A young man told me, quite seriously, that he had seen a German plane the night before, at another town. He said it showed a green light and then it turned and showed a red light. … Nobody ever explained why an unfriendly plane should be flying at night over a sparsely populated area. …

Stevens went on to relate his own experience with the sighting of strange lights on a mountain near Scipio in Millard County:

There was on instance when strange lights were actually seen in the sky at night. I know about it because … I was up there with them. It was while we were still climbing mountains with surveying instruments. One of the stations to be occupied was on a summit that was in an easterly direction from the town of Scipio. There was at the time, working with me, a young man whose name was Newman. …We found lodgings in Scipio and the next morning we started for the summit with two saddled horses and a pack horse. The pack horse carried surveying equipment and a meager camping outfit. I expected to be two nights on the summit. We had found that the instrument work had to be done fairly early in the day. As the day advanced the air became heated and unsteady and it was almost impossible to get an accurate sight on a distant signal. When we reached the summit the day was well advanced. We were surprised to find that the air seemed clear and untroubled. If it stayed that way it might be possible to finish the work that day. It was arranged that, if observations were completed, I would signal by building two fires at night where they could be seen from the town, and Newman would come up with the horses the next morning. There was a dance that night in Scipio for the young people and Newman attended. It was a perfectly orderly affair until one of the young men rushed in from outside shouting something about a German airplane. There was an immediate stampede and Newman, who had a very good idea of the cause for the excitement, lingered until the rush was over. Then he strolled outside and listened in amusement to the excited comments. The mountain was not visible and the lights probably seemed farther away and higher than they actually were. In their excitement the observers imagined them to be racing madly about the sky. There was no doubt in their minds as to what they were seeing. In time the excitement wore off and the dance was resumed. On the mountain summit I was totally unaware of the excitement I had created. After there had been sufficient time for the fires to be seen I extinguished them and crawled into the sleeping bag. Newman arrived, as agreed, the next morning. We said nothing, in the town, about our involvement in the excitement of the night before. War-nerves being what they were, someone might start the tale that we were really German agents and that our mysterious “surveying equipment” was really apparatus for communicating with the plane. We left town without attracting attention.[1]