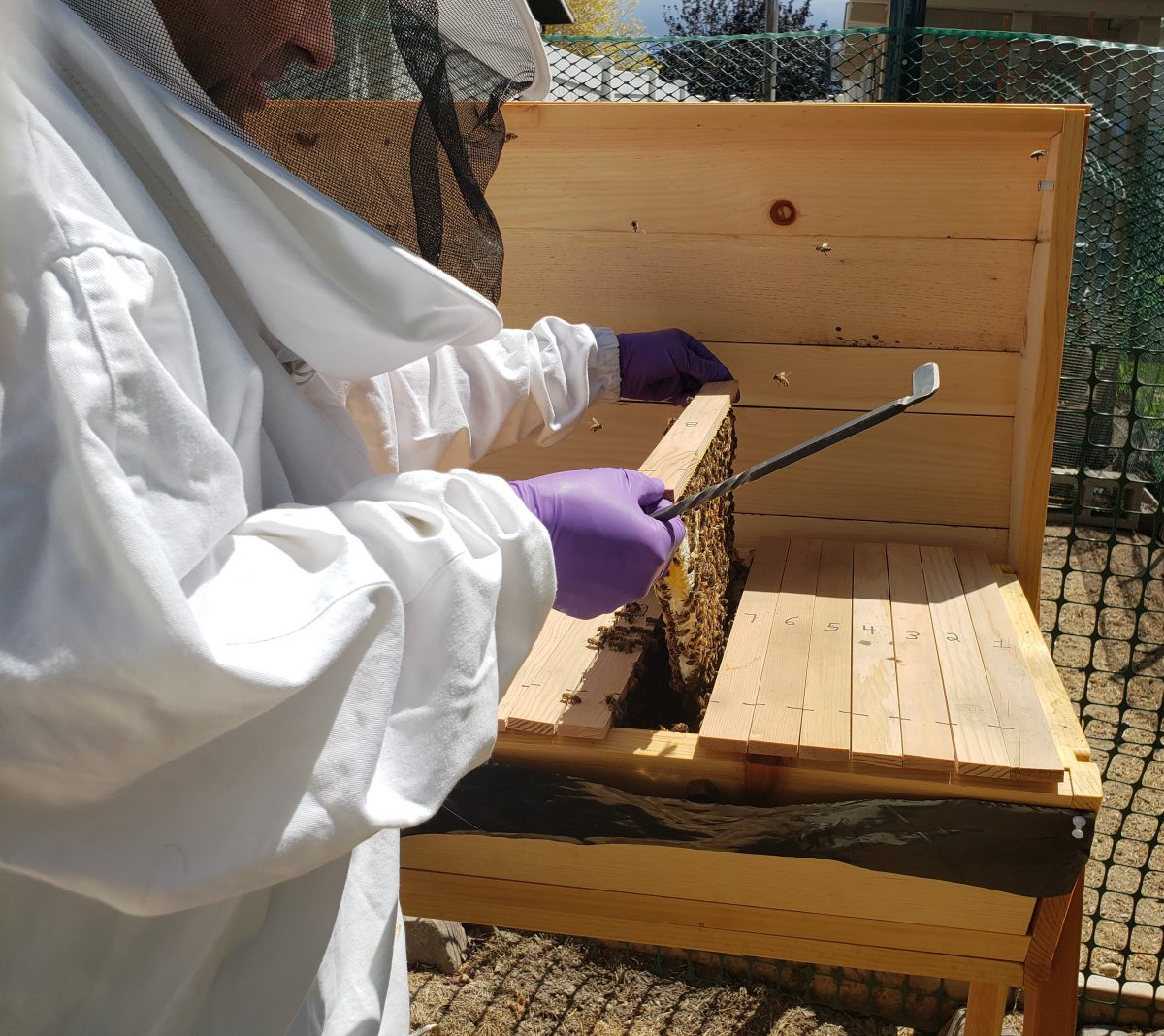 Editors’ note: J. Michael Hunter’s article “Laying the Foundation for Utah’s Beekeeping Success” appears in the summer 2020 issue of Utah Historical Quarterly. In this Q&A Hunter offers a fascinating look into bees and beekeeping and their significance to the Beehive state’s history.

You write about beekeeping, and you keep bees yourself. Are the two pursuits connected? Did your academic interest in the subject grow out of your personal experience with it?

My academic interest in bees and beekeeping started before my personal experience with it. Years ago, I wrote my master’s thesis on the bee and beehive symbols in Latter-day Saint culture.[1] To comprehend how the symbols evolved, I had to study how honey bees live and work. I also had to understand the history of beekeeping practices and methods. I became fascinated with these amazing creatures. It was years later that I said to myself, “I want to keep bees.” I took some classes and started keeping a couple of hives in my backyard. Intuitively, I sensed a connection with bees. They bring me a lot of joy. My personal experience with beekeeping, in turn, prompted me to do further research on bees and beekeeping. Books about bees and beekeeping sit on my library shelves alongside books about Utah history. It seems natural that those two interests would merge, resulting in my article about the early history of beekeeping in Utah.

Your article details the “foundations” of beekeeping in territorial Utah. From a big picture, help us understand how common and successful beekeeping became in the twentieth and twenty-first centuries.

For more than a century, Utah’s beekeeping presence and contribution to national honey production have been consistent and relatively minor. Utah has maintained between 30,000 and 50,000 hives annually, representing around 1% of all beehives in the U.S. Utah has produced between 2 and 3 million pounds of honey annually, representing between 1 and 2 percent of all honey produced in the country each year. Utah’s beekeeping and honey production reached its peak in 1963, with 52,000 hives producing 4.3 million pounds of honey. Around 1900, Utah ranked twenty-first among states for honey production, with 1.2 million pounds generated by 34,000 colonies, which represented around 2% of all honey produced in the country. In 2018, Utah ranked twenty-third among states for honey produced with just over 1 million pounds made by 26,000 hives, which represented less than 1% of all honey produced in the country. Over the century, very few Utah beekeepers made a living solely from beekeeping. Regardless of how Utah compares nationally, beekeeping and honey production have had a significant impact on our state. The keeping of honey bees has provided state residents with a steady supply of honey and has contributed significantly through pollination to other agricultural pursuits such as the fruit and alfalfa industries. Since the 1970s, the United States has seen a substantial decline in its honey bee population. In the early 1960s, the country had around five and a half million colonies, whereas today it has approximately 2.6 million colonies. Utah has followed this national trend. Beekeeping has nearly disappeared in some states while a few states maintain most of the country’s hives and produce much of the honey. Considering Utah’s population, geography, and climate, I would say that Utahns have demonstrated a significant interest in honey bees and a remarkable stick-to-itiveness when it comes to beekeeping.[2]

What accounts for the prominence of the beehive as a symbol of Utah, and does this state differ from others in this regard?

Honey bees are social insects, which live together in large, well-organized groups. They are highly evolved insects that engage in a variety of complicated tasks not practiced by many other insects. For example, honey bees communicate symbolically with each other.[3] The honey bee colony’s peculiar societal functions include worker bees that work in such unity as to be one and a queen bee who appears to be the unifying force. In 1911, American entomologist William Morton Wheeler argued that groupings of social insects like bees form a single unique being with a unity of thought and consciousness.[4] Scientists refer to these single organisms made up of individual organisms as superorganisms.[5] Latter-day Saint leaders found inspiration in these unique creatures for the type of unified whole Church leaders hoped to achieve in their religious society. Certainly, they observed the hard work of the bees, but it was the societal structure that held deep theological meaning for the Latter-day Saints. It was a concept around which they could inspire a religious community. That, I believe, explains the prominence of the bee and beehive symbols in nineteenth-century Utah culture. However, the meaning the symbols held for the people of Utah changed over time. They evolved from nineteenth-century religious symbols to twentieth-century secular symbols focused more on hard work and industry.[6] I cannot explain the symbols’ lasting prominence in this state. The bee and beehive emblems have more eminence in Utah than any other place of which I am aware. The images of the bee and beehive are so pervasive that most residents of Utah hardly notice them. Yet, once you become aware of them, you see them everywhere. I can’t explain the persistence of these symbols in Utah; it’s a mystery to me.

What do you think is the significance of the honey bee and beekeeping to Utah history?

Honey bees and beekeeping in Utah are part of a much larger story. Honey bees and humans have been interacting for thousands of years. They have followed similar migratory patterns throughout history. Honey bees developed traits conducive to domestication. Living near each other, humans and honey bees have, over time, grown to depend on each other. Europeans brought honey bees with them to the Americas in the early seventeenth century. While humans and honey bees followed the same general migratory patterns, bees could advance a little ahead of humans due to swarming.[7] The story of Utah beekeeping is part of the larger story of westward expansion in America and an important part of an interesting tale of how a species migrated across an entire continent. The account of how honey bees made their way to the intermountain west and the Wasatch Front is not a story that has received much attention. It’s a unique story. The human and honey bee pioneers migrated together to Utah, and there was a significant human intervention that allowed for the introduction of the honey bee to the region. Human persistence against high odds led to the survival of the honey bee in Utah. It is a fascinating story about a unique relationship between two species trying to survive together in a challenging environment. It provides a thought-provoking perspective on human-non-human relations. Once here, the honey bee has had a noteworthy impact on farming through pollination. Honey bees are, therefore, also a significant part of the history of agriculture in Utah. We’ve just scratched the surface on this topic. Further research of this special relationship between humans and honey bees in Utah could allow us to explore many vital aspects of our state history, including monoculture farming, pesticides, pollution, the effects of urban sprawl, and even the ethics of domestication.

What, if anything, is misunderstood about the honey bee and beekeeping that you’d like readers to understand?

North America is the most urbanized region in the world, with over 80% of the population living in cities, making us increasingly separated from nature.[8] To many of us, a bee is a bee is a bee. We throw all bees and bee-like creatures into the same basket and often respond to them with fear. For example, many people do not distinguish between honey bees, wasps, and hornets. It doesn’t help that many children’s books and cartoons depict honey bees living in something like a hornet’s nest instead of a beehive. Fear of bees is common in the general population.[9] This fear is often grounded in misinformation about what bees are and how they act. It is also sometimes based on negative experiences people have had with other bee-like insects such as wasps. In some cases, sensationalized media portrayals of Africanized honey bees, known as “killer bees,” color our perception of the ordinary backyard honey bee. Some communities in Utah have responded to these generalized fears by either banning or severely restricting beekeeping in their communities.[10] Honey bees attack in defense of their hives, or when accidentally squashed. Honey bees die after stinging, so they don’t go around surrendering their lives indiscriminately. They are mostly non-aggressive. Honey bees that are out foraging in gardens have no interest in attacking humans. Sometimes when I work in my garden, I brush against lavender and sage plants full of honey bees. These bees pay little attention to me. I have only been stung by a honey bee once when I accidentally squashed one that landed on my leg and got caught in the cuff of my pants. I have never been stung while tending my beehives. I have, however, been stung many times by wasps. Yellowjacket wasps, which are often mistaken for honey bees, cause most insect stings in the United States. They can repeatedly sting without losing their lives. They seem to be easily provoked to attack. Unlike honey bees, wasps are carnivores, so they can sometimes be pests when we’re out barbecuing.[11]None of this is to say that people shouldn’t be cautious around all insects with stingers, including honey bees. Some people do have allergies to honey bees (as well as other stinging insects), and some people are not aware that they have these allergies until it is too late. However, to most people, a bee sting is not life-threatening.[12] Backyard beekeeping is generally safe, and my neighbors have never complained about the honeybees I keep in my backyard. I share my honey with neighbors, so they understand that honey bees are beneficial and productive members of our community. The honey bees in my backyard pollinate my neighbors’ gardens and help increase their vegetable yields. Insect pollination contributes over $15 billion to annual agricultural production in the United States. Honey bees contribute $11.68 billion of that. Honey bees produce 3.9 billion pounds of honey in the world each year.[13] They are incredibly beneficial beings.

[6] Hunter, “The Mormon Hive: A Study of the Bee and Beehive Symbols in Nineteenth-Century Mormon Culture.”

[10] Robert T. Moriarty, “Backyard Beekeeping in the Beehive State: Salt Lake City’s Beekeeping Regulations, Nuisance Concerns, and the Legal Status of Honey Bees,” Utah Law Review 2018, no. 1 (2018), https://dc.law.utah.edu/ulr/vol2018/iss1/5/. Most cities in Utah have their ordinances published online either in PDF format or as a  searchable database.