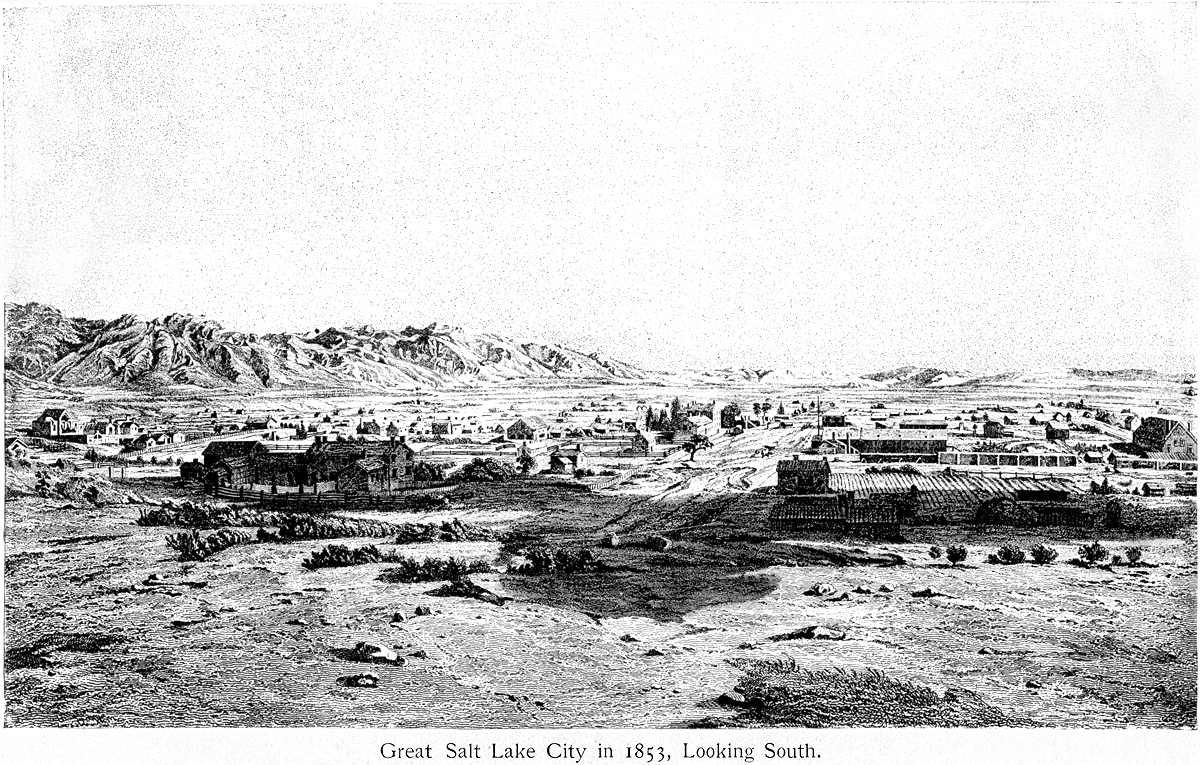 The recent discovery of a sheepskin map purported to be the original plat of Salt Lake City created by LDS surveyor savant Henry G. Sherwood fewer than two weeks after Brigham Young arrived in the valley has brought this long-forgotten grandfather of Zion back into the conversation.[1] In the latest issue of the Utah Historical Quarterly, Rick Grunder and Paul Cohen introduced us to the map of Salt Lake City they acquired in 2016 and subsequently sold to the Library of Congress, and they, along with the scholars Steven Olsen, Richard Francaviglia, and Ronald Grim, assess its significance to the Mormon settlement of the American West. We can set aside the question of the sheepskin map’s authenticity and dating for the map experts to resolve; that question is distinct from the question of  who deserves credit for overseeing the first survey of Salt Lake City. As Grunder and Cohen assert in their article, that credit goes to Henry G. Sherwood, the indisputable master surveyor of Salt Lake City. The comments that his contemporaries made about Sherwood, as well as his own words he left behind, paint a picture of a man that could not easily be forgotten by any who knew him. It is time to bring Sherwood from obscurity back into the light.

Authoring this map was not the first of Sherwood’s contributions to the early years of the Church of Jesus Christ of Latter-day Saints, nor would it be his last. “Father Sherwood,” the oldest member of Brigham Young’s vanguard company, was a loyal, multi-talented no-nonsense leader on whom both Joseph Smith and Brigham Young relied over the decades, from Kirtland and Missouri to Nauvoo through early Utah and all the way to the Mormon settlement in southern California. Sherwood’s leadership and influence extended well beyond surveying, into the areas of property management, law enforcement, politics, and logistics. That the Mormons’ 1857 clash with the Federal Government was sparked by conflicts over land surveys makes Sherwood’s role in early Mormon history all the more significant.

Henry Sherwood lived until the age of 50 in various towns along the Hudson River while broadscale surveying was underway in support of the rapid development of transportation links throughout New York state. He and his family lived just 10 miles southeast of the origin of the Erie Canal when it was being constructed.[2] During this time David Burr, whom the Federal Government would eventually send to oversee surveying for Utah Territory, was compiling the first atlas of New York.  Henry Sherwood may well have contributed to Burr’s seminal atlas project.

Sherwood joined the Saints in Bolton, New York, then Kirtland, and Missouri, and Nauvoo; he was appointed to the high council in each of these locations. In 1839 the Nauvoo high council appointed Sherwood to take over from Joseph Smith the management of the Nauvoo city plot, act as clerk in the business, and supervise sale of town lots.[3] Smith even employed Sherwood to survey Smith’s own properties.[4] Sherwood worked with chief Nauvoo City Surveyor Alanson Ripley,[5]  who like Sherwood had been an early member of the Bolton New York church.[6]. Ripley may also have been affiliated with Burr’s Atlas of New York before joining the Saints.

Although he was in the first pioneer company to the Great Basin in July 1847, Henry Sherwood did not enter the Salt Lake Valley with the rest; he was sick with “mountain fever” and stayed behind in East Canyon.[7] He had little time to recover;  Brigham Young initiated the survey of Salt Lake on August 2, 1847,[8] and put “Father Sherwood” in charge.[9]  Sherwood’s plan was approved a week later, after which he departed on “an exploring expedition to Cache Valley,” and left Bullock to draft detailed maps based upon his work.[10]

In 1851 the LDS apostles Amasa Lyman and Charles Rich founded a Mormon colony in southern California, and the following year Young drafted Sherwood to join the leadership team there. Sherwood arrived in San Bernardino just as the U.S. Surveyor General began laying out the base and meridian lines that would serve as the reference point for surveying all of southern California. [11]

In addition to his surveying expertise, Sherwood’s wisdom and experience setting up new government structures would be of value to the Mormon effort to create a distinct legal entity for the Mormon settlement. San Bernardino County was officially incorporated in April 1853, and Sherwood was one of four commissioners Lyman and Rich appointed to negotiate the financial details of separating from Los Angeles County and setting up the new government. Sherwood, elected county surveyor in the county’s first elections, laid out the one-mile-square city of San Bernardino as (in the words of one history of the county) “a miniature Salt Lake City.”[12] Each block comprised eight acres, and “the streets were given good Mormon names” including Kirtland, Independence, and Far West Avenues.[13] The original survey had at its center a public square, where a temple could have been erected.

Not long after the survey was completed, Brigham Young called Sherwood back to Utah Territory. Sherwood was in Utah Territory when the Mormon courts announced their controversial manslaughter verdict on March 19, 1855. Federal surveyor John Williams Gunnison and several members of his surveying team were murdered by Pahvant Indians while on assignment in Utah Territory in 1853 and many suspected Mormon collusion.[14] Sherwood was on his return to San Bernardino, however, when David Burr, who had authored the landmark New York State atlas, arrived in July 1855 to take up his appointment as Utah Territory surveyor.[15] Young was not eager to incorporate the Federal land policy into the property distribution system he had set up, and again refused to cooperate with Federal officials. One wonders how meticulous surveyor Henry Sherwood might have viewed the conflict. Burr did succeed in defining the intersection of the base and meridian lines for Utah Territory, and laid a stone on the spot near Temple Square on 31 Aug 1855.

Although Sherwood retained his primary residence in San Bernardino, Rick Grunder and Paul Cohen noted that Sherwood was still viewed as the authority on the Salt Lake City survey long after he had handed the position over to his successor, Jesse Fox.[16] The plaque that describes the significance of the Base and Meridian stone laid by Burr in 1855 on the southeast corner of Temple Square attests to Sherwood’s pivotal role in the creation of Salt Lake City. [17] Now, the renewed attention created by the newly recovered sheepskin map provides an opportunity to give Henry Sherwood his due respect.

[11] Sherwood departed Salt Lake City for San Bernardino September 24, 1852. He met Lyman and Rich near Las Vegas on November 23 and arrived in San Bernardino on December 9; “Later from the south—From Sonora and the Colorado,” Daily Alta Californian, November 10, 1852, 2. “Col. Washington and his party left town [Los Angeles] on Monday for San Bernardino, where the survey of the Base Line will be commenced. A. B. Gray, Esq., late of the Boundary Commission, is engaged in surveying a range of township lines from San Bernardino to the sea coast.” For details about Federal surveying in southern California, see Michael A. Duffy, “Three Monuments, One Initial Point,” Mount Diablo Surveyors Historical Society website, accessed October 19, 2019, http://www.mdshs.org/articles/duffy.html.

[13] The nine streets that had Mormon names (all running north-south) were renamed A through I Streets in 1869 when the city was reincorporated. Arda Haenszel, “The Streets of San Bernardino,” Odyssey, City of San Bernardino Historical & Pioneer Society 19, no. 2 (August 1997): 4.

[16] A comment by Sherwood after giving a detailed description of the correct markers for the boundary reveals that his confidence in his abilities remained—as did his disdain for Fox: “I hope that my former letter was sufficiently definite to establish the true boundaries of your (City lot). Should it require further definition let me know, that I may try to remove Foxism imbecility in that case. I made a true survey. It astounds me that it was disputed. Competence of a surveyor could not have disputed it.” Henry Sherwood to Thomas Bullock, June 18 and 19, 1863, CHL.