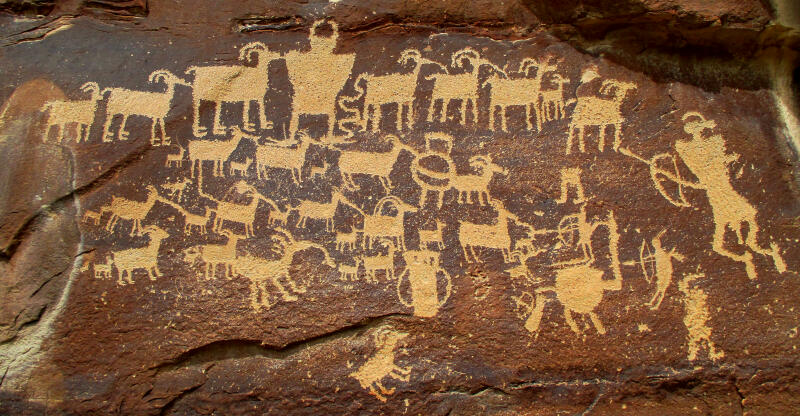 World heritage is defined as cultural or natural heritage that has outstanding universal value. Universal value in heritage essentially means that world heritage belongs to everyone, as it is international in nature and citizens of the world have a right to learn from and access it. World or universal heritage is generally defined by heritage sites that are placed on the United Nations Educational, Scientific, and Cultural Organization’s (UNESCO) List of World Heritage Sites. Currently, there are no UNESCO World Heritage Sites in Utah, and there are only 11 cultural heritage sites and 12 natural heritage sites in the USA as a whole [1]. However, this does not mean that Utah’s heritage is not universal, as Utah’s heritage is outstanding in significance and value, warranting international recognition and protection.

Highlighting in the UNESCO fashion of the cultural and natural heritage categories, five heritage sites Utah are featured here that are universal in nature – 3 cultural and 2 natural heritage sites. While many of these sites have seen national recognition with National parks or monuments designations, they also deserve international classification, as they are truly unique and outstanding in value.

Along with the tangible archaeological components of Bears Ears, the area also holds intangible components, as it is sacred to many Native American Tribes who still use the area for traditional and ceremonial uses, such as connecting with ancestors, collecting herbs and medicine, foraging for food, hunting game, and collecting firewood for ceremonial use [2]. While many tribes that currently reside in the Four Corners Area may lay claim to the ancestral heritage of Bears Ears, five tribes have recently come together as the Bears Ears Inter-Tribal Coalition to represent the sacred and tribal interests of the area: the Navajo Nation, Hopi Tribe, Ute Mountain Ute, Zuni Tribe, and Ute Indian Tribe [3].

“The Coalition represents a historic consortium of sovereign tribal nations united in the effort on multiple fronts to work collaboratively to protect and promote sacred, spiritual, historical, natural, scientific and cultural resources on lands within the Bears Ears landscape.”

Arguably the most famous rock imagery site in the country is the Great Hunt Panel in Nine Mile Canyon. Images of this rock imagery site can be seen all around the world, exhibiting the international reach of Nine Mile Canyon. The panel certainly exhibits a masterpiece human creative genius – the first criteria of significance under the UNESCO World Heritage Sites List [5].

On May 10th, 1869, the First Transcontinental Railroad from Omaha to Sacramento was completed – and the meeting point was in Promontory, Utah [6]. Two companies – the Union Pacific and Central Pacific – agreed upon the Utah meeting spot and held the Golden Spike Ceremony to commemorate the railroad’s completion. The Union Pacific’s No. 119 and the Central Pacific’s Jupiter came head to head for the famous picture of the Golden Spike Ceremony [6], an event that is not only locally, but also nationally and internationally significant, representing the unification of the contiguous United States.

The completion of First Transcontinental Railroad exhibits an outstanding technological development as well as cultural phenomena, as labor crews were primarily Irish and Chinese immigrants [6], laying a framework for a portion of the US demographic today.

On May 10, 2019, Utah celebrated the 150th anniversary of the railroad’s competition in multiple Spike 150 events, culminating in a large ceremony at Golden Spike National Historical Park where the Golden Spike Ceremony’s famous photo was recreated.

Home to the historic meeting of the First Transcontinental Railroad, Utah is exceedingly proud to be the stewards of this universally significant heritage.

The geologic Morrison Formation is world famous for preserving paleontological assemblages – mainly dinosaur fossils. The Cleveland-Lloyd Dinosaur Quarry, recently designated as Jurassic National Monument managed by the BLM, is home to the highest density of Jurassic era dinosaur fossils ever found [7]. Located in central Utah, over 12,000 dinosaur fossils have been excavated to date with thousands more remaining in the ground [7]. The majority of the fossils come from the Allosaurus fragilis, a carnivorous theropod dinosaur that lived around 150 million years ago [7, 8].

The quarry is theorized to be a predator trap, as bones from numerous dinosaurs species are mixed together [8]. The jury is still out on how exactly these dinosaurs died and why they are so well preserved, but paleontological work at the site will hopefully solve the mystery of one of the world’s most important paleontology sites.

The universal significance of the Cleveland-Lloyd Dinosaur Quarry/Jurassic National Monument is undisputed, monumentally contributing to our understanding of the Earth history and the Jurassic age of dinosaurs.

If there is one area in Utah that contains both natural and cultural, tangible and intangible heritage, it is Grand Staircase-Escalante National Monument. Covering over a million acres of BLM land in Southern Utah, Grand Staircase has something for just about everyone – archaeology, paleontology, recreation, biology, geology, history – the list goes on [9].

The formations of cliffs, terraces, and plateaus resemble a type of natural staircase, which is where the monument gains it’s name from. In addition to cliffs and terraces, the monument contains arches, hoodoos, toadstools, slot canyons, and natural bridges, which all culminate in an amazing geologic landscape found nowhere else in the world [9]. Biologically, the monument covers five life zones, and is also home to thousands of dinosaur fossils where several new species have been discovered [9].

More recently in history, a significant amount of archaeological sites are present in the monument from the Anasazi and Fremont periods that are sacred to modern-day tribes [9]. Modern people also use the area recreationally to hike, camp, bike, and climb.

“This unspoiled natural area remains a frontier with countless opportunities for quiet recreation and solitude.”

So – Utah’s Heritage is Universal

These five examples meet many of the significance criteria for universal heritage for inscription on the UNESCO World Heritage Sites List:

UNESCO Criterion iii: “Bearing a unique or at least exceptional testimony to a cultural tradition or to a civilization which is living or which has disappeared” [5] Bears Ears, Nine Mile Canyon, Grand Staircase-Escalante National Monument

UNESCO Criterion v: “Outstanding example of a traditional human settlement, land-use, or sea-use which is representative of a culture (or cultures), or human interaction with the environment especially when it has become vulnerable under the impact of irreversible change” [5] Bears Ears

UNESCO Criterion x: “To contain the most important and significant natural habitats for in-situ conservation of biological diversity, including those containing threatened species of outstanding universal value from the point of view of science or conservation” [5] Grand Staircase-Escalante National Monument

These five examples of Utah’s universal heritage do not encompass all that Utah has to offer. There are many other valuable and significant places in our great state, only highlighting our rich and vibrant heritage. Utah’s distinct heritage carries many universal aspects and one day may receive international recognition through the UNESCO World Heritage Sites List.