The lists below should be taken as advice. You will learn how to adapt the suggestions to your individual needs. The lists have been adapted from the Utah State Historical Society’s “How to Conduct an Oral History Booklet.” They have been modified to match the technological changes and to incorporate insights from Donald Ritchie’s Doing Oral History and Donna M. Deblasio’s Catching Stories: A Practical Guide to Oral History. We strongly recommend reading chapters three and five of those books, respectively, for a more in depth treatment.

Some of these will be repeated in specific instructions, but they bear repeating.

“Don’ts” are often more nuanced than “Do’s” in oral history interviewing. There is a time for many of these don’ts, but they must be done carefully and tactifully.

To Start the Interview 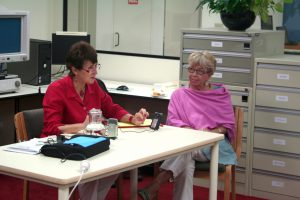