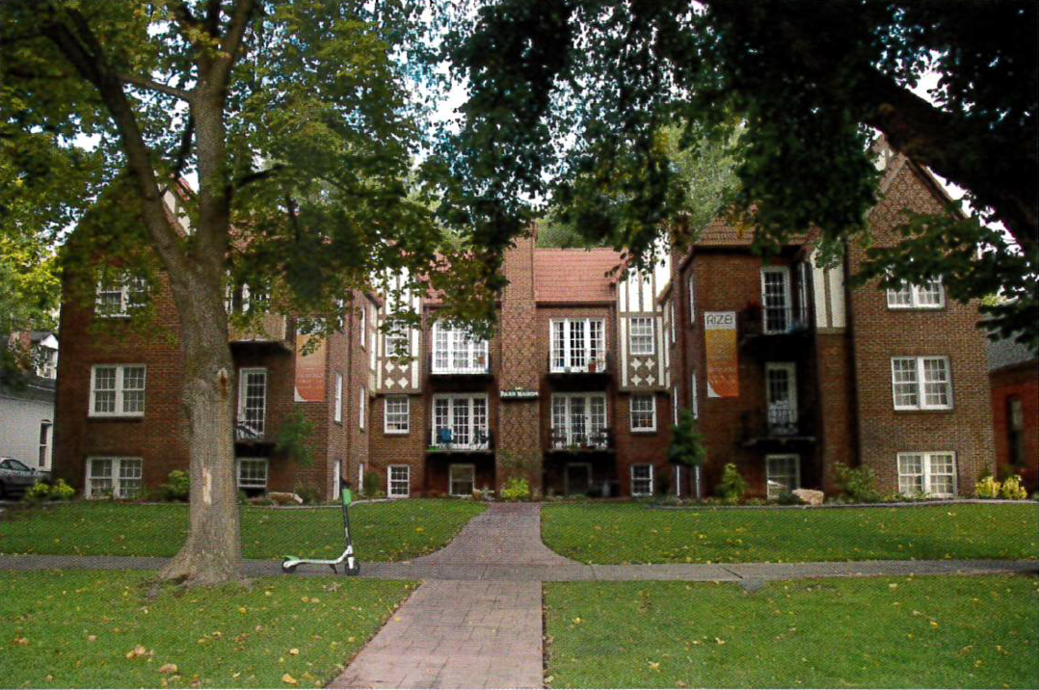 The historic Park Manor Apartments at 841 South 500 East were constructed in 1931 by contractor and developer, A. E. Jorgensen. This building was one of the 180+ apartment buildings constructed in Salt Lake City during the first few decades of the twentieth century as the city finished a multi-decade period of rapid urbanization. Park Manor is a significant example of the English Tudor architectural style and contributes to the National Register of Historic Places (NRHP)-listed “Salt Lake City Eastside Historic District.”

As a contributing residential rental property in an NRHP-listed historic district, this building met the first and second requirements for both the Federal and Utah State Historic Rehabilitation Tax Credit programs: be listed on the National Register and be incoming-producing (Federal) or residential (State). As primarily a finishes upgrade, the rehabilitation fastidiously met the programs’ third requirement: all of the work must follow the Secretary of the Interior’s Standards for Rehabilitation.

One of the most noteworthy ways in which the project met the Standards was the retention of many important character-defining features. These features included the original wood divided-light windows and doors, internal floor plans, arched openings, and many built-in phone nooks and cabinets. The original apartment units contained retractable Murphy beds ( within doored compartments. While the beds themselves were long gone, the compartment doors remained intact. The owners decided to remove the internal infrastructure that held the bed, but retained the closet doors as an homage to the historic feature –turning the remaining space into a functional closet.

Not only was this significant building saved, but thanks to the applicant’s sensitive upgrades for modern living, it can now continue its life as an apartment building –a function it has maintained for nearly nine decades. And the best part? By applying for and following the programs’ requirements, the owners have been approved for income tax credits equivalent to 40% of their rehabilitation costs!

The Salt Lake Engineering Works Foundry & Pattern Shop were constructed as part of a larger foundry complex at the beginning of the twentieth century near the corner of 400 South and 700 West. These buildings are located within the expanded NRHP-listed “Warehouse Historic District.” This neighborhood is significant for its association with the coming of the railroad and the industry that followed.

The Foundry building was constructed in 1902 and the Pattern Shop in 1904. The Foundry was expanded to the west in 1904 with the Bogue Supply building which, under separate ownership, successfully received Federal historic tax credits in 2003. The Foundry and Pattern Shop buildings were joined with a connector in the 1970s, creating open space between all three building sections.

As a contributing commercial building in the historic district, this property met the first two requirements for the Federal Historic Rehabilitation Tax Credit program. The rehab project also met the Standards by retaining and restoring character-defining features such as an internal mezzanine, historic window and door openings, original walls that had been removed when the buildings were connected in the 1970s, an original safe and door, and historic wood floors.

These warehouse spaces now hosts several businesses, drawing activity and attention to Salt Lake City’s west side. Not only that, but the owner will receive income tax credits equivalent to 20% of their rehabilitation costs!

Are you interested in rehabilitating a historic building? Wondering if you could be eligible for income tax credits? Visit our website at https://history.utah.gov/preservation/financial-incentives/ or contact Amber Anderson at amberanderson@utah.gov or 801-245-7277.