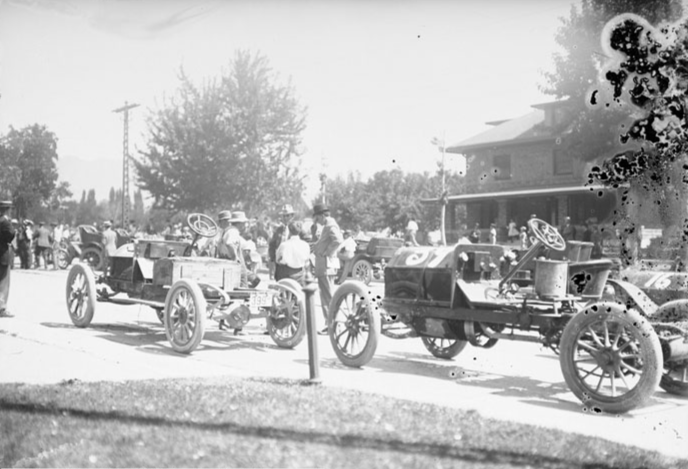 On the night of October 23, 1909, “boys with aspirations for a joy ride” stole a car, drove it around for “a few hours hitting the high places”, and then ditched it on State Street and 10th South in Salt Lake City. “While they were on their pleasure jaunt the police were on their trail, but they managed to keep out of sight of the blue coats.” When the car was recovered the next morning, it “showed the results of some hard running.”[1]

This is the first reported incident of juvenile joyriding in Salt Lake City. Joyrides like these became increasingly common in Utah during the first few decades of the 20th century. Often, cars were stolen and driven until the gas ran out, then abandoned, although in 1916 the Salt Lake Telegram reported that “the latest thing in joyride sports is the flinging of beer bottles—empty beer bottles—at passing automobiles….”[2] Two years later, police believed they had finally caught three boys who were part of “a daring band of auto thieves who have terrorized car owners of Salt Lake for several weeks past”. These boys had “been winning fame as the ‘joy ride’ kings among many young girls.”[3] Joyriders put themselves and others at risk, especially when alcohol was involved. Predictably, the joyriding phenomenon increased as more cars shared the roads. In 1919 the Salt Lake Telegram complained that 120 automobiles were stolen in Salt Lake City that March alone, representing a total value of at least $120,000.[4]

Police, lawmakers, and newspaper reporters speculated widely about the reasons for this epidemic. Most of these joyrides were crimes of convenience. One joyrider told a reporter about his motivations: “We were young and wanted to speed them up, [even] if we had to borrow a car.”[5] In the Sleater and Sox case, a reporter speculated that it was the adoration of “the eternal feminine” that motivated these thieves.[6] Often, alcohol was involved. In 1914, the Salt Lake Telegram reprinted a “Joyride Formula”:

Steel nerves, alcohol, and the influence of disreputable women fueled the joyriding dilemma.

Reporters argued about the most effective means to counter this problem. In an April 1919 editorial for the Salt Lake Telegram, the author complained that the juvenile court system wasn’t doing enough to stop the problem: “Their youth saves them from the penitentiary and they apparently pay little attention to the moderate punishment inflicted by the juvenile court,” he groaned. He argued for larger mobilization among insurance companies, the Automobile Association, and the municipal and county authorities.[8] Teetotalers believed that prohibition would solve this and all other urban vices. Others argued that compulsory high school education would be the “End of the Joyride”, and a cartoon from the September 12, 1919 Park Record suggests that perhaps the wrecklessness of joyriding was not limited to automobiles.

In order to curb these joyriding incidents, Utah leaders enacted several strategies. Juvenile court judges imposed heavier fines on joyriding offenders, and Utah enacted prohibition legislation in 1917. The Utah legislature passed a compulsory school attendance law on March 11, 1919, making high school attendance mandatory.[9] However, none of these solutions seemed to work. The Salt Lake Telegram complained in 1921 that “public indifference based on the fact that often thefts are but the pranks of mischievous boys has permitted the evil to grow to its present proportions.”[10] Whether it was due to alcohol, teenage hormones, or delinquency, it is clear that the youth in Salt Lake City did not stop joyriding.