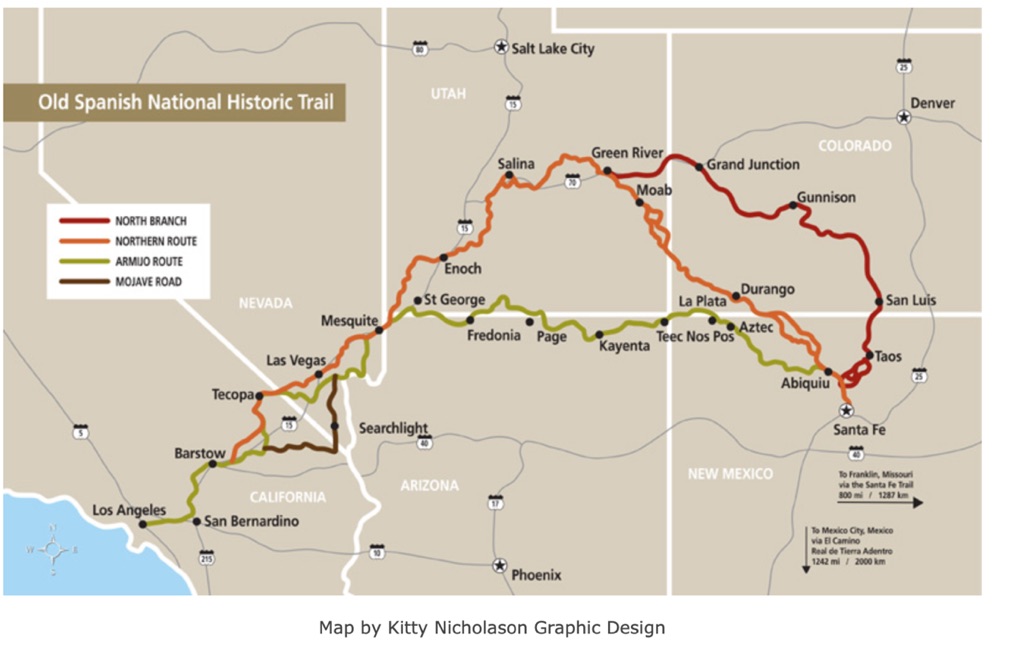 As a historical collections curator for Utah Division of State History, I recently processed and arranged Steven K. Madsen’s research and photograph collections. He and University of Utah Professor Emeritus C. Gregory Crampton (1911-1995) used primary and secondary sources, including documents, maps, manuscripts, and photographs for In Search of The Spanish Trail: Santa Fe to Los Angeles, 1829-1948 (1994). These resources, especially their photographs, are invaluable to anyone interested in The Old Spanish Trail, Utah history, and the history of the American West.

About the Old Spanish Trail

The Old Spanish Trail’s origins date back to the Dominquez and Escalante expedition in 1776. The Spanish priests established a trade route from New Mexico to Utah’s Great Basin area but were unsuccessful in connecting the trail to Spain’s settlements in California. The trail became a popular emigration and trade route after Mexico gained independence from Spain in 1821 as it connected Santa Fe to Los Angeles. The Spanish Trail closed in 1848 when Mexico deeded the territory to the United States to end the U.S.- Mexican War. The newly acquired land opened new routes for Euro-Americans emigrants to travel overland from east to west.

John C. Fremont referred to the route as the “Spanish Trail” during his 1844 expedition, and the name became popular as mapmakers continued to use it over time. [Footnote 1] As seen in the map above, people used multiple routes; however, the most widely used was the 1,120 mile Northern Route as seen in orange. This is where Madsen and Crampton conducted most of their research.

During the 1970s and 1980s, Madsen and Crampton retraced and photographed the Old Spanish Trail from Santa Fe, New Mexico to Los Angeles, California. Each photograph containing a typed description of the place and date. The following are only a few examples of the hundreds of photographs in the collection.

Madsen and Crampton retraced the trail across the Continental Divide and passed Durango and Mesa Verde in Colorado.

The trail moved north from Mesa Verde through Monticello and passed by what is now Canyonlands and Arches National Parks. Emigrants and traders favored the northern route to avoid the Colorado River’s canyon country in southern Utah and northern Arizona.

Madsen and Crampton followed the trail across the Green River in Emery County and the southern part of the Great Basin in Sevier County.

Madsen and Crampton retraced the trail through the Mojave Desert, Spanish Canyon, and Cajon Pass in California.

Steven K. Madsen received his M.A. in History from Brigham Young University in 1986. He has written several books, including A Union, Utah, History (1981), the history of Union and its place within the larger framework of Utah history. He has also coauthored a number of books with C. Gregory Crampton, including In Search of the Spanish Trail: Santa Fe to Los Angeles, 1829-1848 (1994), and the U.S. government studies The Navigational History of Bear River, Wyoming, Idaho, Utah (1975), Boating on the Upper Colorado (1975). He also was a contributor to Utah Historic Trailsmap (1998) and wrote Exploring Desert Stone: John N. Macomb’s 1859 Expedition to the Canyonlands of the Colorado (2010).