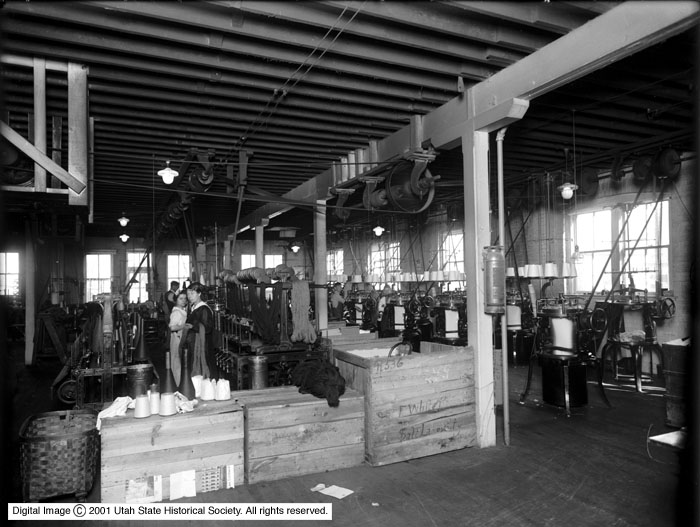 Editors’ Note: The SPRING 2021 UHQ opens with the story of Amanda Olson, the working-class daughter of Swedish immigrants whose story dominated local news in 1891. After Olson was either raped or seduced–the language was intentionally vague–she “shot [her] betrayer.”

We asked Lisa Tait, the article’s author, a few questions about Olson’s life, the contemporary climate, and the difficulties surrounding womanhood and sex in the late 1800s.

How did you become acquainted with Amanda Olson, the central character in your article “I Have Shot My Betrayer”?

When I was working on my dissertation, I came across a one-sentence reference to the Amanda Olson case in a magazine article that was published shortly after the trial. For some reason it piqued my interest, so I went to the Utah Digital Newspapers database and searched for “Amanda Olson”—and wow, I had no idea that I would hit such a jackpot.

You’ve specialized in both literature and Latter-day Saint women’s history. How did those backgrounds come together in this article?

I think my background training in reading texts made me aware of the way the Amanda Olson story—and the character of Amanda herself—were portrayed in the newspapers as a story. The reporters invoked the word story explicitly, and they often described Amanda or the proceedings in terms that shared language, imagery, and connotation with literary sources like novels, poems, and plays. As I read and re-read the accounts of the trial, I became very aware that we were getting a highly constructed narrative, both of the crime and the trial.

The core of your argument concerns the nineteenth-century social (and even legal) conventions regarding rape and seduction. Can you describe the conundrum women faced? What was on your mind as you researched Amanda Olson’s experiences?

At base, the conundrum was that if a woman was known to have engaged in any kind of sexual transgression, she would be ostracized (“ruined”), regardless of whether she consented to the sexual contact or not. If Amanda Olson had tried to press charges of rape against Frank Hall, she would have been laughed out of court, and she would have been treated as a fallen woman. Ironically, the punishment for admitting to having been raped could have been worse than what actually happened by killing him. She knew she had no recourse for having been raped in the legal system—so instead she committed murder. Did she know she would not face legal consequences for killing the man? We have no way of knowing, but it’s a profound commentary on the times that she made that choice—and did  get away with it.

The notion of “unwritten laws” is a fascinating one. How would you characterize origins (social, religious, or otherwise) of unwritten laws such as the ones at play in the Amanda Olson case?

The unwritten laws were based on deeply sexist ways of thinking about women and of treating women’s sexuality as a commodity to be traded between men. Moreover, in the cases of women like Amanda who struck back against their abusers, the unwritten law provided a release valve that prevented the written law from having to deal directly with male privilege and exploitation of women. If a few high-profile women were acquitted, it still left the entire system of male dominance in place—ruffled for a minute, but ultimately intact. It would take until the 1970s for that system to begin to be truly dismantled.

With the murder of Frank Hall occurring within weeks of President Wilford Woodruff’s statement on the cessation of plural marriage within the Church of Jesus Christ of Latter-day Saints, the timing of Amanda Olson’s murder of of Frank Hall comes at time when marital relations in Utah are under considerable scrutiny. How do you situate Frank Hall’s relationships with two women within this setting, and do you think these shifting social norms affected the trial?

The religious dynamics of the case are fascinating to me, but I didn’t have enough time or space to take them on in the article. Yes, Amanda Olson killed Frank Hall just days after Woodruff’s Manifesto. She was LDS, Hall was not. The lawyer who defended her, the lawyers who prosecuted her, and the judge who heard the case were all non-Mormons who were heavily involved in the anti-polygamy campaign. The foreman of the jury was a brother of LDS apostle Heber J. Grant. And yet, in the newspaper accounts of the trial, there was virtually no mention of any religious tension or dynamics. The Salt Lake Tribune even referred to Olson’s father as “an old Saint,” in a way that was uncharacteristically sympathetic given their usual treatment of Mormons. I have no idea what to make of this. Maybe in the first flush of what felt like a victory for the anti-Mormons after Woodruff’s manifesto, there was a feeling of détente over religious tensions. Maybe gender ideology trumped everything else. But then, that magazine article I mentioned where I first saw reference to the case—it was in the Young Woman’s Journal, the magazine of the LDS young women’s organization, in an article written by the female leaders pleading with girls not to marry “outsiders.” According to that article, the judge in the Olson case said that it would have been better if she had not taken up with someone outside her own faith. So in the Mormon community, at least, the story took on yet another resonance—as a cautionary tale to warn girls about the dangers of taking up with the wrong men along religious lines. The Manifesto did not end that concern and in fact intensified it, as they worried that the end of polygamy meant there would be even fewer righteous men to go around.

What’s the rest of Amanda’s story?

I have always wanted to know, but the efforts I made to track her down when I first worked on the case several years ago did not get very far. Then when the article was published, a colleague of mine, Emily Crumpton, got in touch with me to say that she has done a lot of research on Amanda Olson and had traced some things about her later life. Thanks to Emily for this information: Amanda lived with her parents and worked as a dressmaker for a few years after the trial (which, I would add, probably represented a demotion in status and income from her former job in a knitting factory). She also started using her middle name, Freda. She married, had two children, divorced, moved to California, remarried, had two more children, and lived in California for the rest of her life, where she died in the 1950s. A few of those details suggest that her unfortunate early experience did create some fallout in her life for at least a while. We can only guess what it meant to her for the rest of her life and how much her family knew about it.