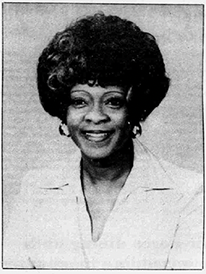 Bettye Gillespie (1928-2021) was a civil rights activist who dedicated her life to working for the rights of African Americans and women in Utah and the United States.

Bettye Gillespie moved to Utah with her family after her father got a job with the Union Pacific Railroad. In 1944, she graduated from Ogden High School when she was fifteen. She went to the University of Utah and the historically Black research institution, Howard University. Gillespie earned bachelor’s and master’s degrees. Gillespie worked as the Director of Equal Employment Opportunity at Hill Air Force base for more than 40 years. During her life, she served on many boards and committees, organized voter registration drives, and went door-to-door to encourage people to register to vote. Gillespie was on the board of trustees for the University of Utah and a League of Women Voters member. For more than forty years, she worked to break down racial, economic, and gender inequality in Utah and across the country.

Gillespie began standing up for equality at a young age. For example, when she was a student, she went to a small store to purchase candy near Central Jr. High School in Ogden, Utah. Gillespie explained that the store owner refused to sell to her because of a previous “incident” with two African American boys.  While there is no context for what happened between the store owner and the two boys, the store owner intentionally refused to serve all Black students because of the “incident.” Gillespie returned to school after the owner denied selling to her and told her principal about the store owner’s new policy. Her principal and Gillespie then walked to the score to discuss the situation. The owner explained what happened and why he chose not to sell to African American students. After hearing the owner’s reasoning, the principal informed the store owner that “he would not allow any of the Central kids to shop at that store.” Since the store owner sold ice cream, candy, and other goods to the junior high students, he agreed to serve her. Gillespie’s dedication to fair treatment began at an early age as she bravely stood against discrimination.

Gillespie and her husband joined Utah’s branch of the National Association for the Advancement of Colored People (NAACP), where they held various roles throughout their lives. Her husband, Jim, was the vice president and then the president of the Ogden chapter of the NAACP. Gillespie worked as the youth director for the group. She also authored all her husband’s speeches while he was NAACP president.

While Utah did not have formal segregation laws, Black Utahns did not have access to many public places in the state. Gillespie remembered challenging segregation when she was a part of the Youth NAACP. For example, African Americans could not swim in Ogden’s public swimming pools and restaurants, and lunch counters, hotels, and “places of entertainment” denied them service. NAACP members Marion Carter and Frank Satterwhite joined Gillespie in challenging Ogden’s swimming pool segregation policy. While the city pools still would not allow them to swim, Weber State invited them to use the pool on their campus. Gillespie’s activism as a student and at the swimming pool are only some of the many ways she fought for the rights of African Americans.

Gillespie dedicated her life to challenging inequality, and many recognized and supported her leadership. She received several awards, including the Black Pioneers in Utah Award, the Ogden Area Community Action Agency, the Juneteenth Legacy of Freedom Award, the Minority Bar Association Community Service Award, and the NAACP Rosa Parks Award. Gillespie’s dedication to equality made Utah a better and more equitable place to live.