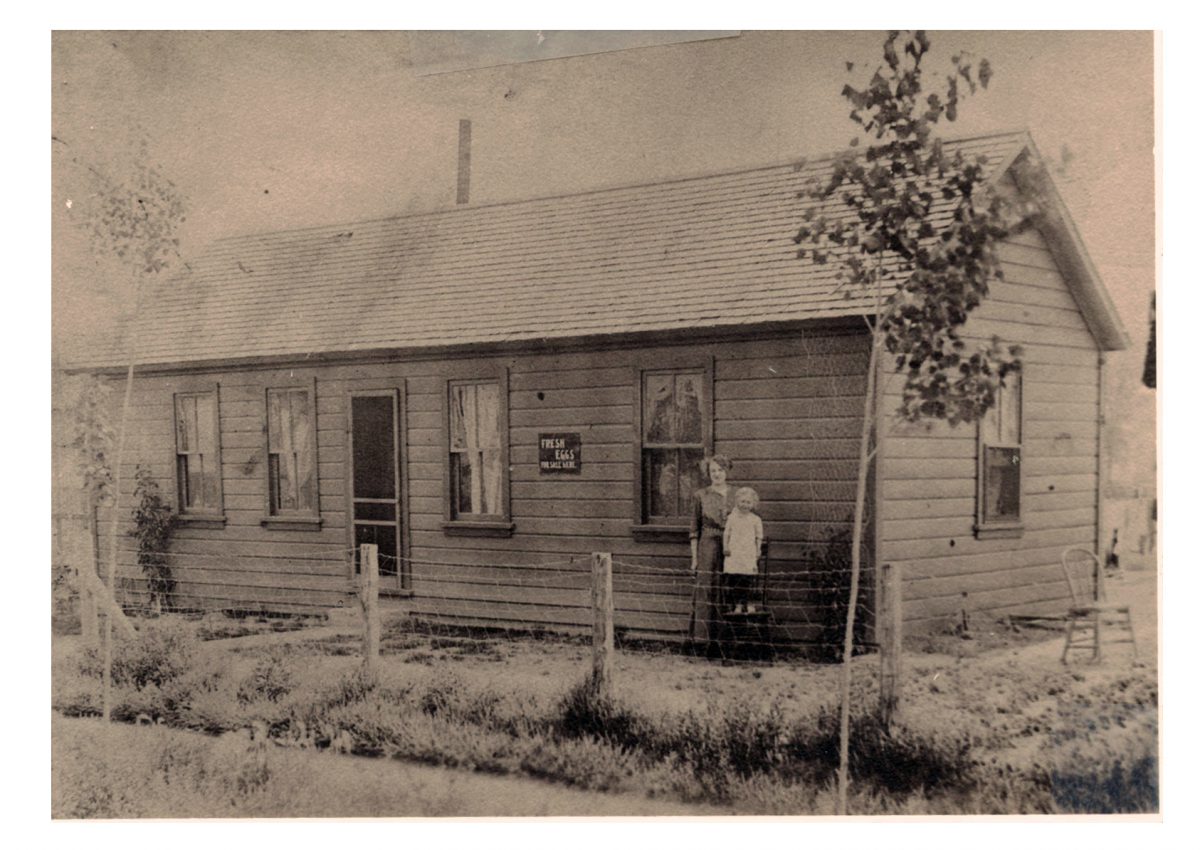 For the past academic year, Cathy Gilmore has served as the Editorial Fellow for Utah Historical Quarterly. Cathy is a graduate student of History at Utah State University.

In Utah, the dead are everywhere. Archives, libraries, temples, and even granite vaults infuse our landscape with an architecture designed to gather, order, and remember the dead. As a family historian, I am a part of this undertaking. We lift the names of the dead from miles of microfilm and click them neatly into place to form a vast, flickering network of ghosts. We clean and catalogue their possessions, forge their lineage, and transform the vague details of their lives into printed volumes. Bound, boxed, and slid on a shelf, the dead, as we say, are history.

Except the dead have a creeping quality. I imagine them leaning in familiar doorways or doing a crossword in their favorite chair. Their memory floats on the smell of buttered rolls or viburnum blossoms, and their letters call to me from dusty closets next to sagging dresses that used to sway with life. Their ethereal presence reminds us that the dead aren’t finished yet, and neither are their stories. Unconfined by institutional order, their artifacts permeate the living world and invite us to “trouble the old stories” with new critical insights, a more democratized historiography, and an ear toward breaking historical silences.[1]

I became a graduate student of history in part to give shape and voice to historical hollows. Gary Topping, in the Fall 2020 issue of Utah Historical Quarterly, wrote about these historical silences in his article, “The History Between the Lines.” “Much of life, in other words, exists ‘between the lines,’” he wrote, “and our histories should include recognition of the contingency of our conclusions as well as embracing both the probabilities and possibilities that life itself requires.”[2] The creation of historical worlds that live between the lines of our carefully constructed institutional histories depends on our willingness to take history off the shelf and wade into the murky historical waters. Historian Will Bagley wrote of this kind of historical process as one “that demands we continually update and revise what we think we know about the past, for history never stops.”[3]

For too many, Utah’s history is a well-worn story whose lines, like the deep ruts of pioneer wagon wheels, offer a single path. My ancestors’ paths were obedient to this narrative of religious refugees entering a foreign land and making the desert blossom through industry and theocratic fervor. They were pioneers who settled Parowan’s foothills, tilled the ground in Lehi, mined in the Tooele desert, lowered their wagons with ropes through Hole-in-the-Rock, and took up the entire Main Street in Farmington. I thought I knew them, but my recent work as Editorial Fellow for the Utah Historical Quarterly helped me to discover the complexity that awaits when we travel beyond our “main street” stories.

UHQ’s Women and Crime issue invited me to recast the reproductive lives of my female ancestors in light of the religious and legal environments surrounding assault, crime, and illicit relationships. Matthew Godfrey’s article on unionizing beet farmers in Utah led me down a research path that illuminated my own great-grandparent’s role in a progressive, cashless exchange program that helped thousands during the early years of the Great Depression. Miriam B. Murphy’s article on women in the workforce inspired me to learn of the occupations of my own female ancestors (factory worker at Purity Biscuit, Utah Wholesale purchaser, chambermaid, fortune-teller, and chiropractor, to name a few.) The special issue on public lands and the environment provided a perspective that complicates my ancestor’s relationship to the land by placing their presence as another link in a long chain of conflict that continues to this day.

While searching for photos for a “Utah in Focus” piece, I stumbled upon an image that contained the Lincoln House, a men’s hostel where my great-grandfather, Archie Chamberlain, used to work. Archie’s story is full of silences, so I began to shape a history around them based on records, research, and family rumor. We don’t know what spurred Percy and Ellen Chamberlain’s baptism into the Church of Jesus Christ of Latter-day Saints in 1887. Nor do we know why this family with four young children moved from England to Utah Territory, and why they brought their ten-year-old nephew Archie, whose father is unknown. A fellow traveler, whose identity is forgotten, helped nurse and care for the ailing baby Robert because Ellen, herself suffering from what could have been tuberculosis–no one can be sure–was too weak to hold him.

Arriving in Salt Lake City in mid-July 1888 after a long rail journey, the family was directed to the open-air tithing yard for lodging. That night, the baby Robert died resting on a bale of hay in what would have been a most cruel exchange for the consecrated goods they received. Robert’s grave cannot be found in the rows of the Salt Lake City Cemetery, nor can his mother Ellen’s, who died a few months later. Laid to rest in paupers’ graves, Percy marked their spot with pansies, or so the family says.[4]

We can guess the streets Percy walked from his apartment in the Marmalade neighborhood through the Avenues to the Salt Lake City Cemetery, carrying his bag of garden tools to care for the flowers that rested on the otherwise unmarked graves of his wife and son. Both the guitar that Percy used to play while singing with his children on street corners and his watercolor painting of his childhood home on the shore Brightlingsea have long been thrown away. We can speculate why Archie became estranged from his adoptive family and moved out on his own to be a porter, then a desk clerk at the Lincoln House.

We don’t know why single mother Mary Nordstrom, who worked at the Lincoln House as a chambermaid, was abandoned by her first husband. No matter. Despite family protests, Mary and Archie married, built a home on a double lot on Navajo Street in Poplar Grove, and had two children of their own. When Archie died suddenly in the backyard while chopping wood, Mary, the neighborhood fortune-teller and egg-seller, kept the family mysteries to herself. Some silences will remain, but the work of history continues. Utah Historical Quarterly is a vital part of that ongoing pursuit, giving voice to silences, color to starkness, and life to the dead.

Three generations later, the roses still grow on their lot on Navajo Street. The chickens are back, too. In the morning, the light spills through the purple glass of the old front door. The dead are welcome here. Digging through the soil, we find the occasional offerings of RC Cola bottle caps and marbles. Like the excavation of my own family history, the unfinished nature of Utah history invites us to change the landscape, pierce the soil, and get our hands dirty. “[The  dead] can speak to us,” says Topping, “if we but train our ears to hear.”[5]

Image caption: Mary Nordstrom Chamberlain with her daughter Matilda in front of their home on Navajo Street.

[4] Modern headstones for both Ellen and Robert have been added by the family’s descendants.