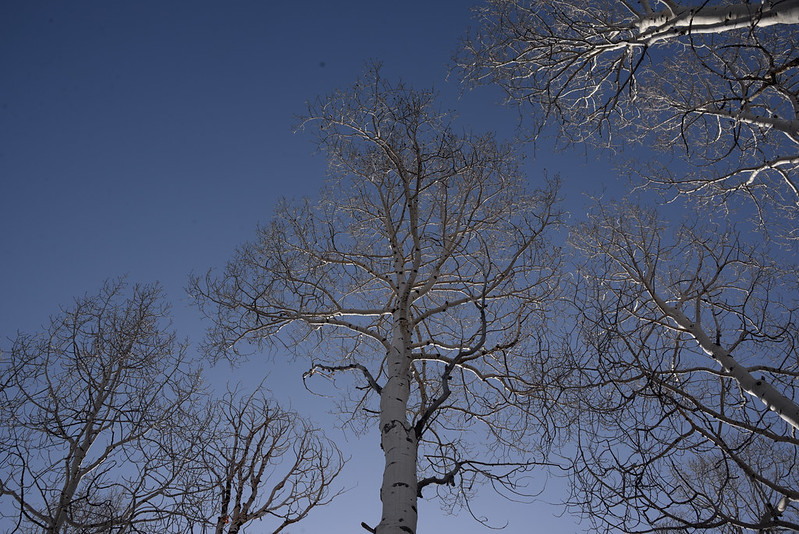 It’s rare that a grove of aspen trees enjoys world renown, but this is the case for a stand known as the Pando clone on Fishlake National Forest in central Utah. Pando—Latin meaning I spread—is actually a single tree, a “forest of one” that sprouts over 40,000 stems through an expansive root system. Its cloned shoots, all from a single male parent aspen, form an ancient stand that is world famous for its size, weight, and age. First described and studied in the 1970s, the Pando clone has come to take on the term “largest single living organism,” and while that claim is not scientifically confirmed it is indeed large, heavy, and old, possibly dating to the end of the last ice age. An object of curiosity, a shrine, a symbol of the interconnections and ancient rhythms that continue to pulse the earth—Pando has become nothing short of an international phenome.

It is also the object of concern. Although to the untrained eye the tall white trunks appear a healthy stand, scientists tell us the Pando is not rejuvenating at rates needed to sustain itself.[1] The root system may live for millennia, but the individual shoots don’t, and when they die off, new ones must take their place. Astute visitors will notice few early and intermediate shoots to replace the older generation—nor the plant diversity common among healthy aspens.[2] Forest health is a complex equation, and no one factor can be attributed to the Pando’s decline, but if one were to be identified it would be the browsing of ungulates—deer, elk, livestock. Fenced enclosures installed in recent years demonstrate promising signs of rejuvenation.

The current predicament of the Pando clone has deep roots in the state’s forest and wildlife management. Beginning in the early twentieth century the nation’s forests underwent a program of intensive management by a cadre of scientists, engineers, and planners. State fish and game commissions, assuming responsibility for wildlife, stocked streams with fish, reintroduced game animals, implemented hunting licenses, and otherwise imposed use restrictions. So much so that in the first two decades of the twentieth century the legislature prohibited hunting for five years, protected female deer with the “buck law,” and instituted predatory control measures. These actions, perhaps predictably, swung the pendulum in the opposite direction: by 1930 deteriorating range conditions prompted renewed attention on conservation. As many as a quarter million deer roamed the ranges of Utah in the decades following 1942. At the same time federal managers regulated the numbers and movements of domestic livestock. Statewide, sheep numbers peaked at the turn of the twentieth century at nearly three million, and cattle numbered 484,000 in 1920. While by midcentury forest officials pushed sheep numbers down by more than half, cattle held steady or only slightly declined in numbers.[3]

Prior to the rise of ecological management, the raisons d’être of forest and range management was, in the words of J. Perry Egan, director of the state fish and game department at midcentury, “to balance numbers of grazing animals with the forage supply”—all in the name of the “maximum production of all the resources on the range.”[4] Harold Crane confirmed this a few years later. The state had every incentive, he wrote, to “maintain deer herds at their highest possible level,” and while the recognition was that an imbalance between wildlife and forage supply would “deteriorate” the range, the concern was for the loss of an economic resource and not damage to the ecological and environmental values of the land.[5]

Although we don’t know specific impacts on the Pando clone, rebounding populations of deer and the presence of other wildlife and domestic animals on forested lands within the state of Utah since the early twentieth century has clearly had an impact on aspen health. Nearly a century ago, long before anyone knew anything about Pando, the Forest Service conducted watershed and range studies to determine forest health. The Manti forest supervisor J. W. Humphrey identified sheep in particular as lethal to “aspen reproduction” and recommended a moratorium of three years for sheep grazing on “cut-over aspen.”[6] A 1934 survey of deer and range conditions on the Beaver district of the Fishlake National Forest involved twenty-six “experiment plats”—not unlike the current enclosures—designed to either keep deer out entirely or to provide access to deer but not livestock. The result: underbrush and lower limbs had started to regrow where deer had been excluded, whereas in the plats grazed by deer the aspens had been “completely stripped.”[7]

Thanks to historic aerial imagery compiled by Dr. Paul C. Rogers of the Western Aspen Alliance at Utah State University—imagery reproduced in the latest issue of Utah Historical Quarterly—we can make out some general changes undergone by the Pando clone since the thirties. Perhaps from these images we can’t make out precise changes, but these images and other data show that, according to Rogers, “while Pando has likely existed for thousands of years—we have no method of firmly fixing its’ age—it is now collapsing on our watch.”[8]

Looking back at forest management—long before Pando was on our radar—we see a complicated legacy of thinking about a rightful balance between wildlife populations and a healthy forest ecosystem. Not then, and not now, do we have consensus. As often happens in resource conflicts on public lands, varying interest groups point fingers. Ranchers sometimes point to deer as the problem, others to cattle. Local Forest Service personnel are supportive of the enclosure project and have a material interest in the health of the Pando clone, but any efforts beyond this, such as regulating deer, cattle, or even recreation, run headlong against the Forest Service’s multiple-use mandate. There are also jurisdictional conflicts that get in the way of a clear solution. Case law generally acknowledges that federal agencies do not have jurisdiction over the wildlife that pass through and live on the lands that they manage. The states do.[9]

Just what levers to pull to put the ecosystem into balance is not entirely clear. No question enclosures in recent years are bringing about a rebound, but the regeneration is limited given that only a portion of Pando is protected. The immediate issue of the health of the Pando is just one strand, albeit widely acclaimed, in a larger complicated picture of forest and ecological health. We’ve long placed high value on the health of aspen stands, but we haven’t always valued the health of ecological systems as an intrinsic good, quite apart from how it serves humans—values that may ultimately determine whether Pando clone can be saved.

[4] Department of Fish and Game, Range for Big Game and Livestock in Utah, 3. Another way to put this is “to maintain the maximum harvestable surplus of animals consistent with game-range production.” Temple A. Reynolds, Jr., The Mule Deer: Its History, Life History, and Management in Utah, published by Utah State Department Fish and Game, 17, PAM 3666, USHS.

[9] This justification has been used to reintroduce, for instance, non-native mountain goats in the La Sal range and non-native trout in alpine lakes. See Adam Federman, “The Hidden Battle Threatening the Future of America’s Wild Places,” Pacific Standard, March 5, 2019, https://psmag.com/environment/the-hidden-battle-threatening-the-future-of-americas-wild-places. An exception to case law granting states ownership and control of wildlife is Hunt v. United States, 278 U.S. 96 (1928), which opined that the federal government had authority to kill wild deer if their numbers had ballooned to such a point as to damage permanently trees, bushes, and other vegetation on federal lands.