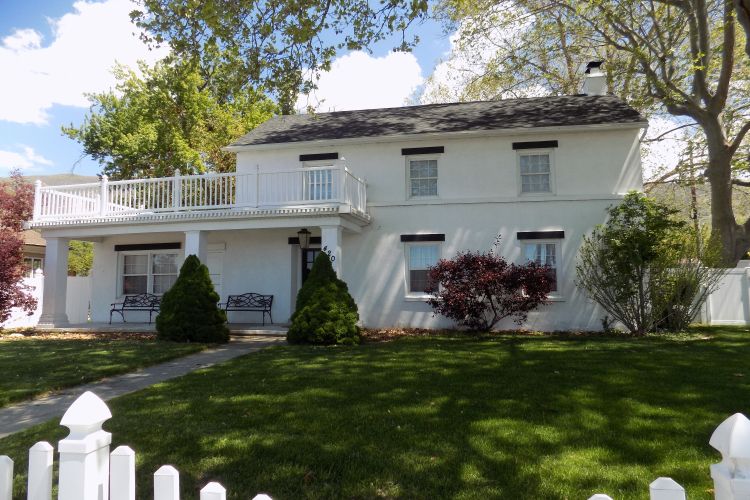 The Joel and Elizabeth Parrish House, constructed in 1864, is locally significant under Criterion A in the area of Exploration/Settlement for the Parrish’s association with the first phase of the settlement of Centerville during the mid-nineteenth century. The residence is also significant in the area of Social History, as it represents a common housing option for polygamous families in the early settlement era of Utah. The period of significance is 1864–1925, which spans the period between the construction date and the death of Elizabeth Bratton Parrish. Joel Parrish, along with his parents, were among the first settlers to establish homes in Centerville. The Parrish family was also involved in the economic development of the city, establishing the first gristmill, and Joel was further involved in farming, participating in cooperative ranching, managing and owning a store, and served the city in positions such as Watermaster and County Selectman. Members of the Parrish family resided in the house from its time of construction until 1969; the home was recently reacquired by another member of the Parrish family in 2010. Throughout these decades, the Parrish family continued to contribute to the social and economic development of Centerville. The house was built by Joel Parrish for the first of his two plural wives, Elizabeth Bratton Parrish. Throughout the early Utah Territory, polygamist husbands who had sufficient finances would build individual homes for each wife. These houses would often be close to each other, so the husband could have access to the families and help in caring for the houses. In order to keep peace between the families, the houses were usually similar in size (though not always) and used for each family. Joel Parrish built this home for Elizabeth and a home across the street (that has since been demolished) for his other wife, Emma Ford. Although some early-to-mid-twentieth century alterations have been made to the house