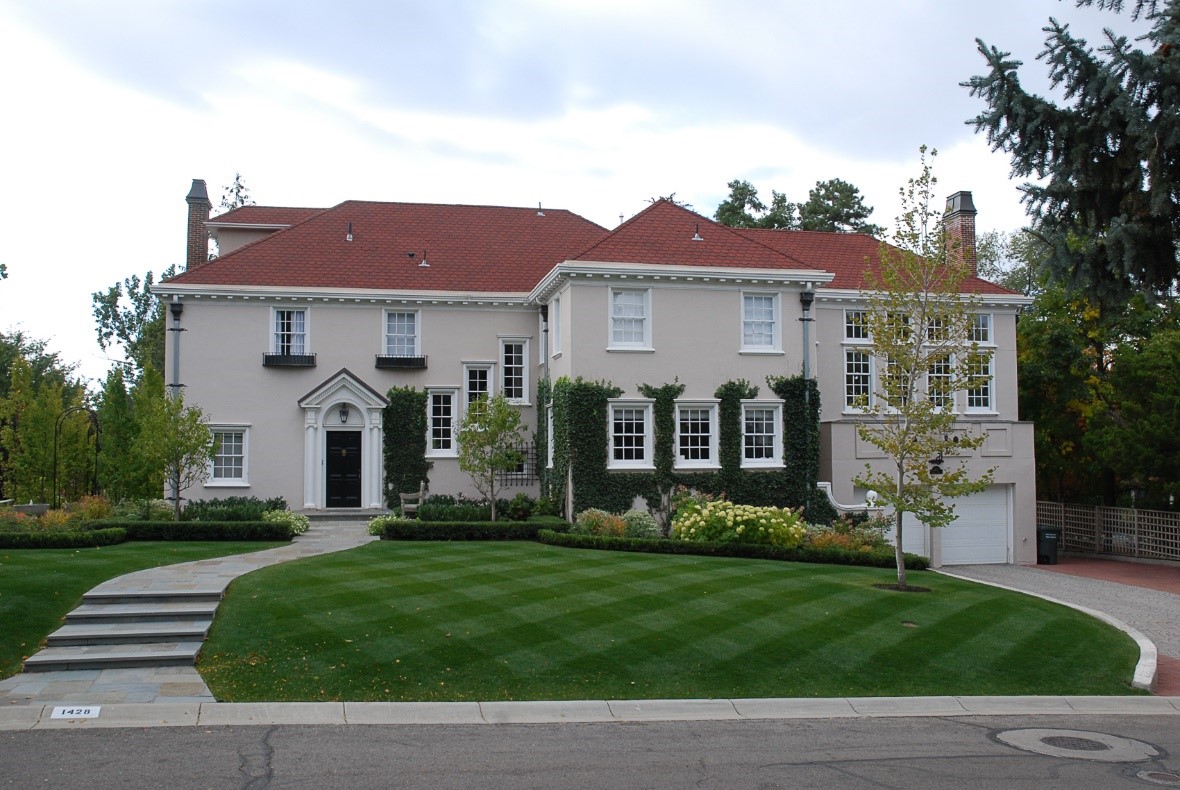 The Edward & Harriett Rosenbaum House, built in 1928, is a two-story Colonial Revival and Georgian-style residence.  The property is locally significant under Criterion C as a high-end architectural example of the Colonial Revival and Georgian Revival styles with some Federal style elements.  The house is also significant for its association with two of Utah’s most prominent architects: Taylor A. Woolley and Clifford P. Evans.  Both men were apprentices to Frank Lloyd Wright in the 1910s, but rarely used Prairie-style elements, preferring to work in different styles to satisfy the tastes of their Utah clients.  The firm produced mostly institutional buildings and apartment blocks.  The Rosenbaum House is the only example of a grand mansion designed by the firm Woolley and Evans whose limited domestic output consisted of more modest houses.  The Rosenbaum House has excellent integrity in the qualities of workmanship, and materials.  The design of the house has all of the characteristics of the classical styles (e.g. fanlights, sidelights, multi-light sashes, dentiled cornice and classical pediments).  The main floor features a formal hall, living room, and dining room that are particularly well-preserved, which enhances the high artistic qualities of the exterior.  The integrity of the original design is somewhat impacted by an early 1990s side addition, but the addition is compatible and is separated from the original house by a breezeway.  The period of significance is the period of construction, 1928.

Edward Rosenbaum, a banker, and his wife, Harriet, were the original owners of the house.  The family lived there only a few years until Edward’s untimely death in 1930.  The second owners, Prescott and Beatrice Dunn, lived there for 25 years, adding a swimming pool and bath house in 1948-1949.  The Dunn family owned a large retail enterprise in Salt Lake City.  In 1955, the property was acquired by an insurance executive, Frederick Moreton and his wife, Sarah.  The Moreton family held the deed until 1992 and made very few alterations, preserving most of the residence’s distinguishing exterior and interior features.

The setting and location of the property also contributes to its architectural significance.  The property represents the Bonneville-on-the-Hill development, a one-of-a-kind model for an exclusive suburb of Salt Lake City.  The Bonneville-on-the-Hill development was conceived in 1917 with the acquisition of dry bench land above the popular Federal Heights subdivision.  In a departure from the norm, a formal plat was never filed for Bonneville-on-the-Hill.  Managed by a syndicate of influential men, the neighborhood did not possess the architectural uniformity of contemporaneous subdivisions.  The neighborhood grew more organically as individual lot sizes were increased and sold ad hoc as wealthy families vied to build increasingly grander mansions from the 1920s into the 1970s.  The Rosenbaum House on Circle Way, built in the late 1920s, represents the early phase of the high-status neighborhood.  The addition of a swimming pool and bath house in the late 1940s (although now altered or replaced) enhanced the property’s status in its exclusive upper-class suburb.  The property is a significant contributing resource in Salt Lake City’s Federal Heights neighborhood.