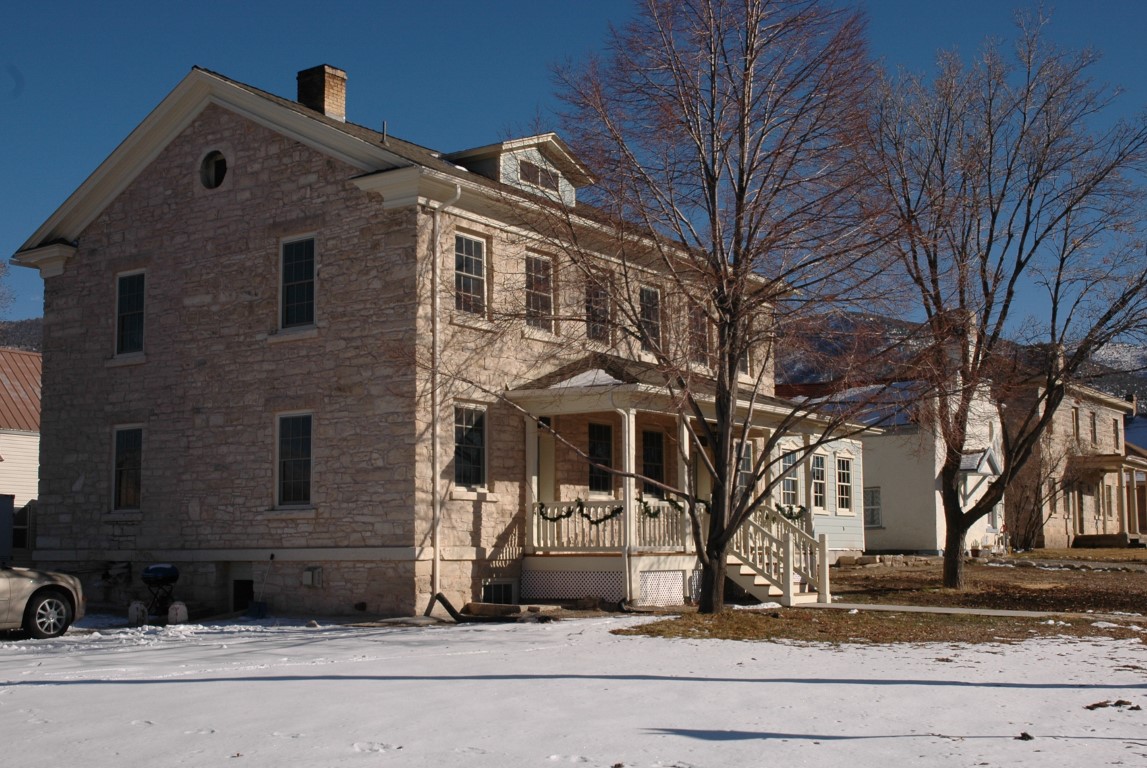 The Cox Family Big House Complex in Manti, Sanpete County is a unique example of a two-story vernacular stone house designed specifically for a polygamous family.  Constructed over the course of seven years, between 1854 and 1861, the Big House was designed to house separate family units and also provide a space for communal social and education activities.  The building is locally significant under Criterion A in the area of Social History for its unique contributions to the understanding of polygamous households in nineteenth-century Utah. Five of Frederick Walter Cox’s six wives lived in the house.  Their names were Emeline Whiting Cox, Jemima Losee Cox, Cordelia Morley Cox, Lydia Margaret Losee Cox, and Emma Sophia Peterson Cox.  As documented by primary and secondary sources, the main floor of the house was divided into four sections, each assigned to the four older wives.  The youngest wife, Emma, briefly shared one of the quarters before having the small stone house built next door around 1871, which contributes to the significance of the property.  The period of significance begins with the first occupation of the house in 1861 and ends in 1882, the last year the wives lived in the house.  Twenty-five of Frederick Walter Cox’s thirty-eight children were raised in the house.  The Cox families made significant contributions to Manti and Sanpete County in the late nineteenth century.

In addition to living quarters, the large room in the Big House was designed for use as a classroom.  It was not only used for educating the Cox children, but older youth and adults living in Manti would attend evening classes in the Big House after their daily work was completed.  The classroom was also used for dances, music recitals, theatrical productions and community meetings.  The attic was used in the pioneer era as a spinning and weaving workshop with up to a dozen women working at a time.  The building was given the nickname the Big House during its initial construction and it is still called the Big House by those with a cursory knowledge of Manti history today.  The landmark is also known as the “Old Polygamy House” to locals.  Although there were numerous polygamous families in Manti during the period of significance, no other historic building is recognized by that distinctive title.  The Cox Family Big House Complex was listed on the Utah State Register of Historic Places in 1972.