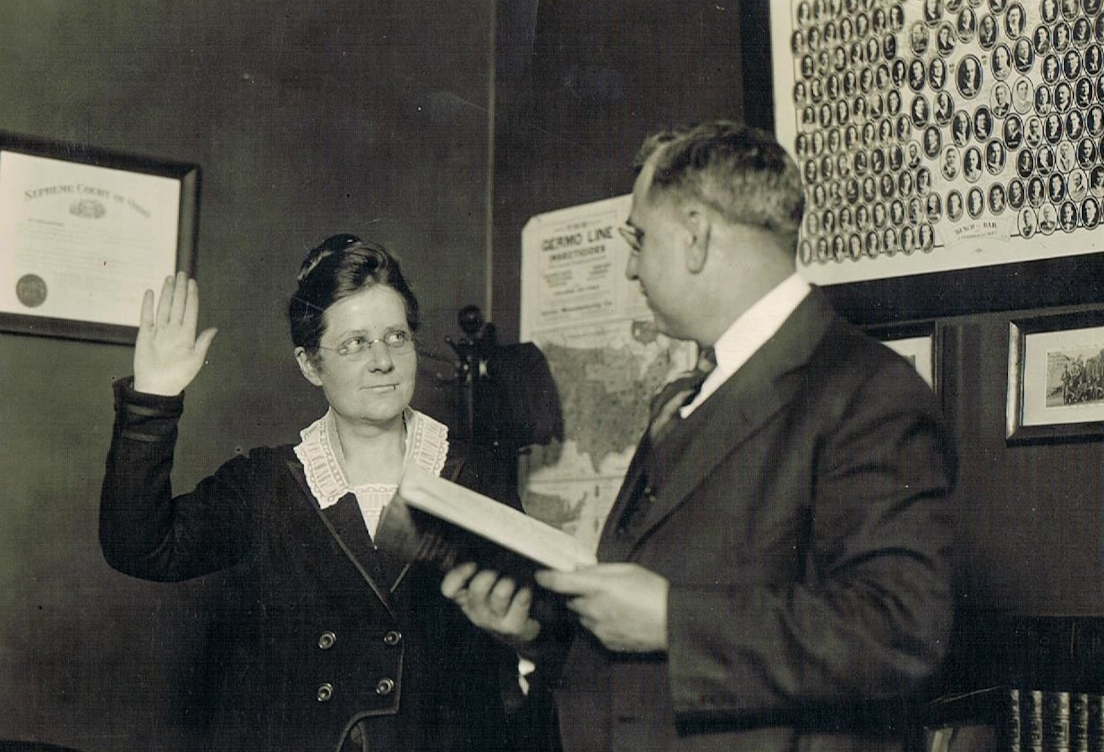 It was January 1, 2015, and Marianne Sezon, my wife, was taking the oath of office as the first female judge from a small rural county in northeast Ohio. A few days later, she received an anonymous manila envelope carefully packaged with the words “DO NOT BEND.” Inside the package was a picture of Florence E. Allen, the first woman elected to serve in our judicial branch of government. In this photo, taken ninety-five years earlier, Judge Allen is depicted raising her right hand to begin her journey as “the first lady of the law.”[1] In August 1920, immediately after the Tennessee legislature ratified the 19th Amendment, Allen’s colleagues at a local Business Women’s Club secured several thousand signatures to place her name on the November ballot as an independent candidate for judge. Without any party backing that November election, Florence Allen became Judge Allen on the Cuyahoga County Court of Common Pleas in Cleveland, Ohio. Born in Salt Lake City with distinguished ties to Utah, Allen would later secure election to the Supreme Court of Ohio in 1922 and an appointment to the Federal Sixth Circuit Court of Appeals in 1934, all firsts for women. Regrettably, while this photograph spoke a thousand words, there was nothing in the package to identify its prior owner.

Being more than a little curious, we engaged in a little sleuthing to determine the origin of this anonymous photograph. With some online digging, we found a phone number for a woman named Florence Allen Hill McNeely living with her husband, Larry McNeely, in West Virginia. Did we dare call?

While I would like to say that we found the identity of the person who sent us the picture of Judge Allen, there was a bit of an ornery streak in Flo McNeely that, despite our strong suspicions, prevented us from truly knowing if she had sent us the package. But it was true that Flo was named after her great aunt, Judge Florence E. Allen, and shared with her a family tradition of speaking one’s mind without regard to gender conventions.

At the time of our call, Flo and Larry were in the process of semi-retirement and a move to the Maryland shore. When growing up, Flo received regular mailings from her great aunt. Birthdays and holidays brought frequent cards, along with words of encouragement for making the honor roll. As a child, Flo did not fully recognize the significance of her famous relative. For her, this was a loving aunt who occasionally traveled the nation and the world to give speeches on the law and attend a portrait unveiling or two. It was not until well after Judge Allen’s death that Flo McNeely had a better understanding of her namesake’s accomplishments. In 2005, when Allen was inducted into the Women’s Hall of Fame in Seneca Falls, New York, Flo was the closest relative to Judge Allen available to accept the award. As many of us can appreciate when we lose a loved one, we do not have a full understanding of that person’s life before our existence. So many questions left unanswered. So much knowledge that could have been gained. So much history to seek.

During this time of transition, Flo and Larry wondered what to do with a variety of Judge Allen’s mementos. Personal things—including books and trinkets related to her many travels—would remain with the Allen family. The bulk of her personal effects were boxed up and distributed to the Western Reserve Historical Society, and, for her work on the federal bench, to the Library of Congress. To honor her mother, the first student to matriculate at Smith College, Judge Allen made sure that Smith received a portion of her final belongings. But what to do with a scrapbook of family pictures that Allen had kept of her childhood?

This singular album, filled with pictures from Allen’s youth, did not make it to a more recognizable archive. Instead, it remained in the McNeely’s basement and suffered its inevitable difficulties with water during a standing rain. These pictures became damp, with the corresponding water marks and mold. Would a new judge and her husband be interested in saving additional photographs of Judge Allen, or were these pictures better suited for the trash dumpster?

In one of those unexpected events that forever changes your life, my wife and I traveled to West Virginia to formally meet the McNeely family. Prior to the journey, I reached out to Amy Thomas, Library Director at Kent State University at Ashtabula, to see what could be done if anything was salvageable from these photographs we had never seen. Amy was confident that both herself and a dedicated team from Kent State could help.

We came to meet and adore Mr. and Mrs. McNeely. What started as a quest for some old moldy pictures turned into a friendship. Together, we planned yearly adventures to both honor Allen and to learn more about the family from additional cousins. Each year, we would meet with Flo and Larry, share stories, and laugh all hours of the day and night. With each trip, our collection of family friends increased, and we learned more and more about each other, Judge Allen, our nation, and ourselves.

Our last visit occurred with Flo before the pandemic and a trip to visit a cousin in New Hampshire. There, we met the family of Judge Florence E. Allen’s close cousin, Lois Tuckerman Mook. Florence and Lois were of similar ages and roomed together during some of their educational pursuits in northeast Ohio. Lois was a constant presence in Florence’s life, there during her final days. In 1965, Florence suffered a fall, fracturing her hip at a time when replacement surgery was not as common as with today’s medicine. Lois was there, writing in a diary with excruciating details about her cousin’s final high temperature and uncontrollable infection that resulting in this first woman jurist dying in September 1966. Sadly, we heard of a very similar fall and injury that Flo suffered in 2020. Surgery was performed, and our talks with Flo and her family encouraged us that she would make a full recovery. Then came the call that we dreaded, when Larry informed us of her passing in September 2020. The circumstances surrounding Flo’s passing with her namesake are eerily similar.

In our sorrow with the passing of Flo, we know that this story is a beginning and not an end. We look forward to meeting with Larry and Judge Allen’s family soon for a more fitting tribute to Flo, post Covid-19. However, our chance meeting seven years ago is something that we will never forget, with my wife and I humbled that we had a chance to meet with the family of one of my wife’s childhood heroes—a pioneer in paving the way for her own career in the law and the judiciary.

In addition, we played a very small role in saving materials that relate to Judge Florence E. Allen’s life. In this scrapbook, expertly preserved by Amy Thomas and a dedicated staff at Kent State University, we can find family photos of the Allen family living in the quaint little village where we reside in northeast Ohio. In addition to the Allen family’s ties to Ohio, we also learned of Judge Allen’s significant connections with the state of Utah, the place of her birth in 1884. It turns out that her father, Clarence Emir Allen, moved to Salt Lake City at the behest of the Holden family to run mining operations with the beginnings of the United States Smelting Refining and Mining Company. Clarence Emir Allen was also Utah’s first representative to the House of Representatives and was called the “father” of Utah’s public schools for service he performed in the Utah Territorial Legislature before his election to Congress.

Within this collection of family photographs, we can see images of the Allen family playing in the back yard or frolicking in the snow after a recent snowfall in Salt Lake City. Florence’s mother appears in numerous photographs cooking or on occasions such as weddings or the birth of grandchildren. Many of the scenes are specific to life in Utah, including images of early copper mines, family hikes in Little Cottonwood Canyon, or the renting of horses at the Regal Stables in Murray. Sadly, the pictures also reflect the passing of life; many of the Allen family are buried in Mt. Olivet Cemetery, including one of Judge Allen’s brothers, Clarence Emir Allen Jr., who earned a Distinguished Service Cross for bravery in World War I overseas. Our journeys to discover this history have taken us to Utah, to visit the family home in Salt Lake City, the Mt. Olivet Cemetery to pay our respects to the Allen family, and to the Salt Lake City Post #409 of the Veterans of Foreign Wars named after Lt. Clarence Emir Allen Jr.

We have discovered much, but there is so much more we want to learn about the family members and locations in these photographs. With the passing of Flo, we long to again visit Utah and explore intriguing connections between “the West” of Ohio at the far reaches of our early nation, and the West of the late 1800s, where so many people from Ohio moved to. We also regret the final chance to talk with loved ones, to learn more about those who came before us. That knowledge, gained from our beloved family and friends, provides glimpses into ourselves and our pasts and, with that, the promise of a better future.