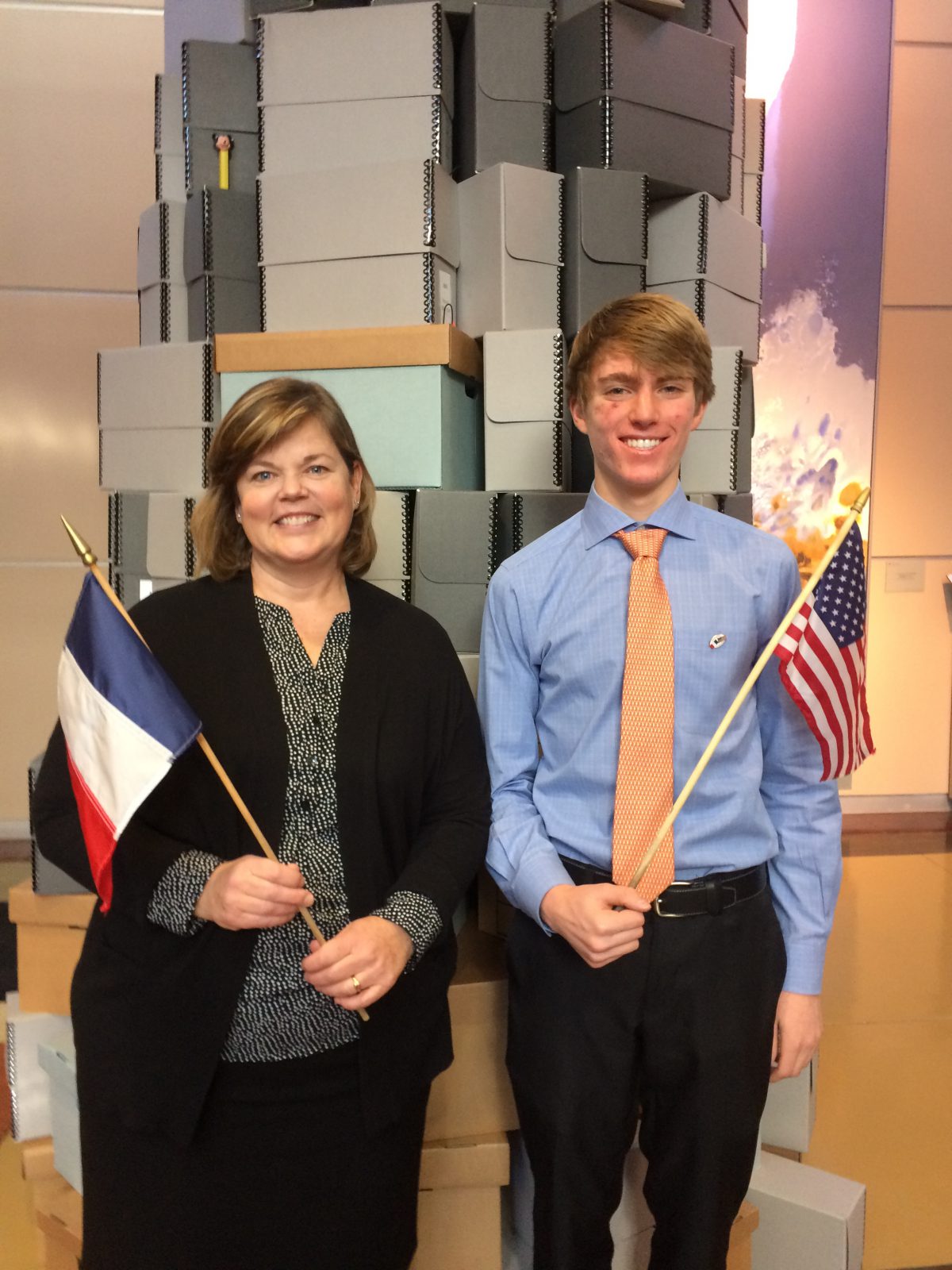 Brighton High School senior Jacob Simmons has stories to tell.  Since middle school he has honed his skills as a historian and documentary filmmaker through Utah’s National History Day (NHD) program.  For his NHD projects, Jacob investigates critical moments in history that connect with his Jewish heritage. He reads complex informational texts, he discovers historical sources, he interviews experts, then he analyzes, writes, and presents his findings via film.  He learns history by making history.

Jacob’s first NHD project focused on the Jewish community of St. Eustatius – an independent trading port in the Caribbean – during the American Revolution. This small group of Atlantic merchants supplied critical arms and supplies to the Americans during the conflict.  The community was brutally attacked by the British navy, but through a surprising twist helped secure victory for the Americans. Watch it here.

For his next project, Jacob turned his lens to Justice Louis D. Brandeis, interviewing several authors, a law professor, and Brandeis’ great-grandson. His documentary was recognized by the Brandeis School of Law in Kentucky.

As a sophomore, Jacob chose to study Israel’s pivotal leader Yitzhak Rabin. Delving into the complicated history of the postwar Middle East, Jacob’s nuanced project focused on the evolution in Rabin’s thinking about Arab-Israeli conflict and his growing commitment to negotiation and compromise.  Watch it here.

Jacob’s most recent project is on Fritz Haber, the German Jewish chemist of the early 20th century who invented some of the most powerful technologies of the age. Haber began his career developing chemical fertilizers that ended famine in Europe and saved millions of lives. But during WWI, he pioneered the use of poison gas as an instrument of war, leaving twin legacies of death: first in the trenches of the Great War and then in Nazi gas chambers. Haber’s story, Jacob observed, illustrates the perils of a nationalist science ungrounded in history and the humanities. Watch it here.

In 2018, Jacob‘s outstanding work earned him a spot in NHD’s coveted Normandy Institute.  In this 6-month intensive program, Jacob and his teacher, Eden Ellingson, studied the WWII literature on D-Day and conducted original research on a Silent Hero from Utah. They then traveled to France to see these historic battlegrounds and cemeteries first hand. There, Jacob delivered a moving eulogy at Second Lieutenant John (Jack) Lundberg’s grave marker.

Each of these projects represents a fresh intellectual journey, informed by Jacob’s historical interests and his creativity.  Through NHD, Jacob has honed skills in research, reading, writing, critical thinking, and filmmaking that he’ll carry with him through college and career.  He has also developed the ability to think historically, to ask penetrating questions, to analyze information, and draw evidence-based conclusions.

Each year, some 7,000 Utah students embark on a similar journey through NHD, where they’ll be touched by history in new and exciting ways. For many, working on their NHD project is an eye-opening lesson in the relevance and power of history to inform the present, and shape the future.

We are always looking for thoughtful and friendly lovers of history to serve as judges at our spring contests. Judges evaluate projects, interview the students, and provide written feedback.  Our students range in age from 4th-12th grade.  They present in five creative categories: exhibit, documentary, performance, paper, and website. Their historical topics run the gamut from war to civil rights, from science to music, from local to world history. Many of our students become passionate about their topics, and it is rewarding to work with them and help foster a lifelong appreciation for history. If this sounds fun to you, please join our judging team!