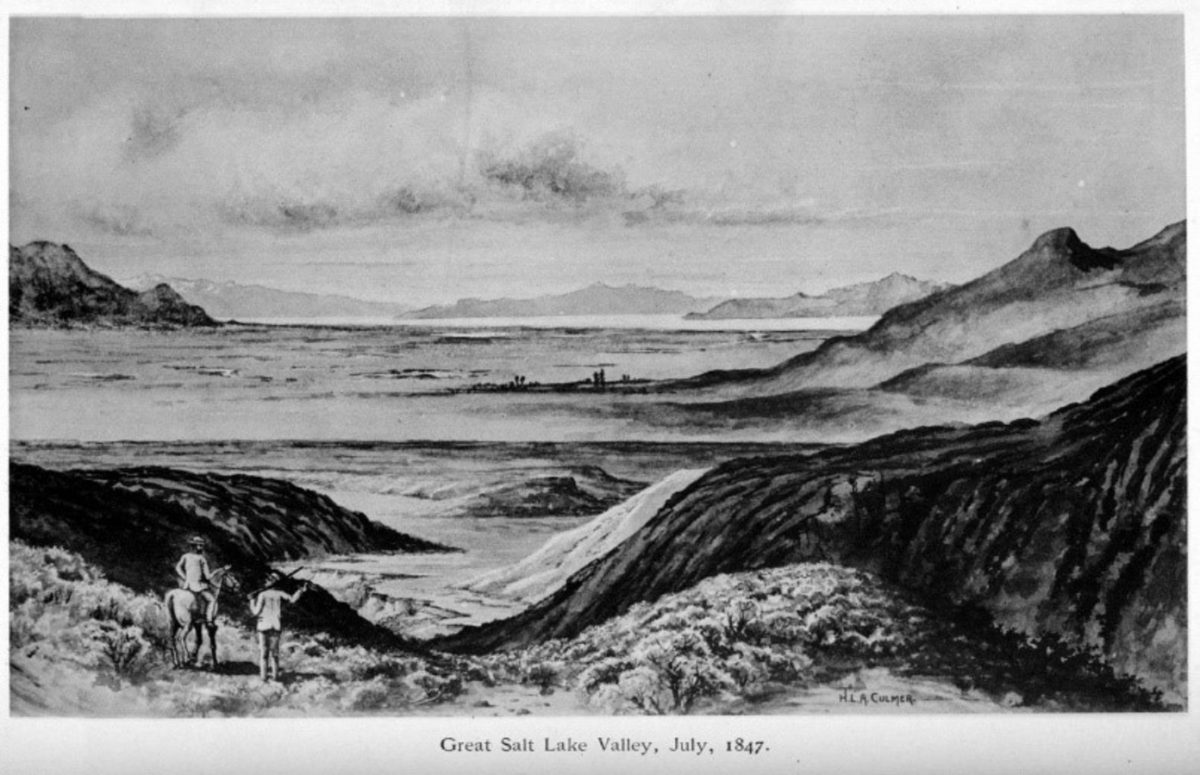 It’s mid-July as I write this blog post and the temperature forecast for the next seven days is near or at 100 degrees.  With the foothill grasses a golden brown and the plentiful snowpack on our highest mountains fading to a trickle, the valley denizens have retreated to air-conditioned havens during the high-noon sun.  We, the collective ‘we’ that is the current population of Utah; know something in our bones that the first pioneers perhaps did not know. The heat, triple digits for too many days, will hang on the remainder of the summer well into September.

This week we will be celebrating Pioneer Day on July 24th. It is the time of year when you might ask yourself, “Well, how did I get here?”, as David Byrnes does in the Talking Heads’ song “Once in a Lifetime.”  Certainly, on any day in July with the blistering heat the status quo it can feel “the same as it ever was.”

It turns out Utah’s first pioneers were not looking for shade as much as they needed fertile soils for farmland.  LDS Church President Brigham Young was once asked by a reporter, “How came you to think of Utah?”  Young said, “Well, we had read an account of General Fremont’s travels – how he found a large salt lake in the interior of our continent, in the middle of a fertile plain.”

That helps explains whywe are here.  But if you want to experience how we got here, follow the historical markers.  Do it in July, in the 95+ degree heat for a real authentic feel as the first Mormon settlers did in July 1847 (maybe wearing heavy cotton and wool shirts and pants).

Before Brigham Young had seen the valley for himself, an exploratory group traveled ahead of him. We know that they spotted the open expanse of the Salt Lake Valley before reaching it, from the “Big Mountain” monument placed at the summit of East Canyon by the Sons of Utah Pioneer in 1984.

From Highway 65 in Echo Canyon, we can travel south through Emigration Canyon.  It can be easy to miss, but on the side of the road sits, a monument called “Last Camp Site” placed by Daughters of the Pioneers in 1936.  On July 23, 1847, this really was the last campsite of the Mormon pioneers (Brigham Young’s group) before entering the Salt Lake Valley.   Unfortunately, for them, Ruth’s Diner had not been built yet.

At the corner of 1700 South and 500 East, you’ll find a park strewn with large boulders called “First Encampment Park.”  The Daughters of the Utah Pioneers placed monument #509 to describe this place as being the first campground of the Mormon Pioneer Company that were sent ahead of Brigham Young. The company clerk, Thomas Bullock, described the camp next to Parley’s Creek: “The grass being only knee deep, but very thick; we camped on the banks of a beautiful little stream which was surrounded by very tall grass… ”

Young would later send the exploratory group a message to “Bear to the northward and stop at the first convenient place for putting in your seeds.” The place where they planted crops only two days after entering the valley ended up on the south branch of City Creek.  According to William Clayton, “The brethren immediately rigged three plows… another party went with spades to make a dam on one of the creeks.”  The Brigham Young Historic Park is great place to go near City Creek to get a feel for the farming and irrigation efforts of those early pioneers.

When Brigham Young’s party emerged into the valley, he confirmed, “This is the Place.”  A monument placed at This is the Place Heritage Park has been determined to be the place he said this.  It is fun to stand there, look upon the valley, and try to visualize the landscape as he saw it that day on July 24, 1847 with no buildings, few people, and even less shade trees.

On July 26, 1847 while exploring the valley, a mound-shaped peak drew the attention of Young and he said, “I want to go there.”  He was not wrong to say that, because from the top of Ensign Peak you get some great 360 degree views. Reach the summit and you will find marker #43 titled “Ensign Peak” placed by the Utah Pioneer Trails and Land Association.  Personally, I prefer to hike this peak in April when the Arrowleaf balsamroots are in full bloom.

In 2019, the population of Salt Lake City is over 200,000.  We are not all direct descendants of Mormon pioneers.  Nor are we all people who want to do that much physical activity in the stifling heat of July.  We may be, though, a people who want to know the history of this place we call home and want to peer through the window of time to understand how we all got here, and monuments scattered across the state help tell some of these stories.