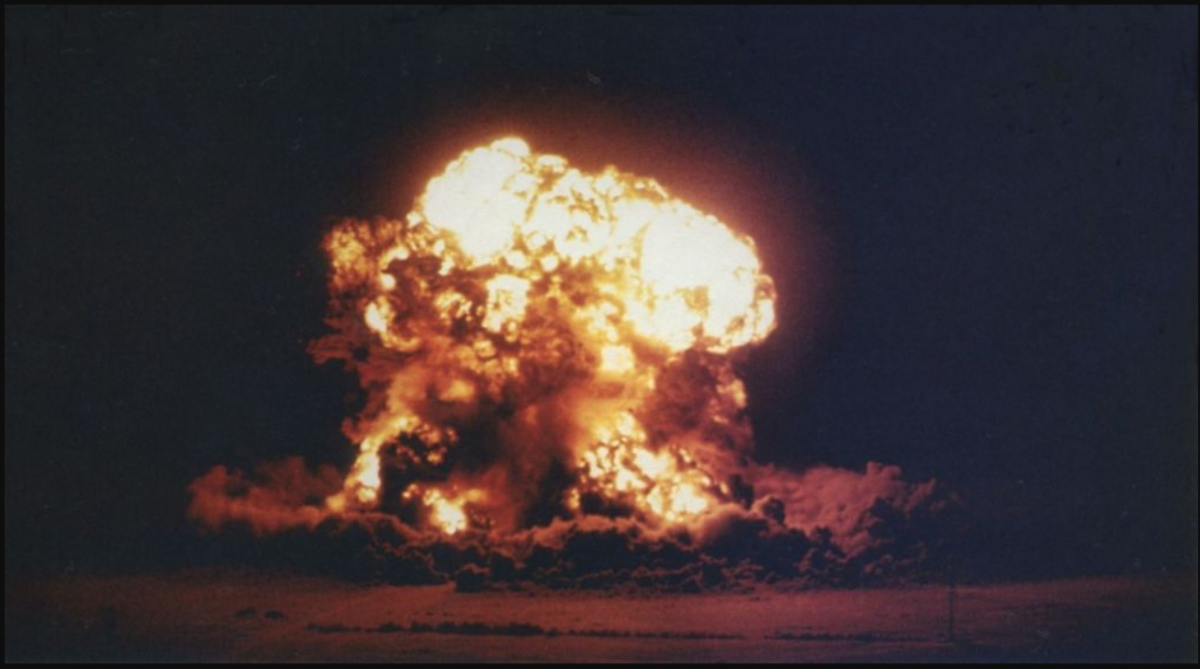 The Diablo nuclear test was part of a larger series of tests known as Operation Plumbbob that took place at the Nevada Nuclear Test Site between May and October of 1957. The Plumbbob tests occurred during major worldwide concerns about the safety of nuclear testing and the resulting fallout, as previous tests during Operations Upshot-Knothole and Castle were plagued by mishaps and high levels of dangerous fallout. While the previous testing at the Nevada site, Operation Teapot, had gone much better than earlier tests, the National Academy of Sciences recommended even more stringent restrictions for future tests. With widespread talk of a worldwide nuclear testing ban, the personnel at Plumbbob needed to find ways to get their testing done while proving that they could do it safely. The most famous attempt to demonstrate this is likely the John missile test, where five men volunteered to stand directly under the exploding warhead to show the public they had nothing to fear from their government’s tactical use of nuclear weapons. All these men survived with no recorded increase of radiation at the test sight (the bomb was detonated 20,000 feet above them, so the radiation largely dispersed in the atmosphere).

During Plumbbob, as in earlier tests at the Nevada Test Site, U.S. troops were deployed, sometimes as observers and sometimes in what were known as the Desert Rock exercises. The government hoped to observe the psychological and physical effects of troops deployed on a nuclear battlefield. Some Plumbbob tests, such as the Hood and Smoky tests, saw mock battles and maneuvers following the explosions. This was not the case with Diablo, where approximately seven hundred troops were simply brought in to observe the explosion from trenches.

The Plumbbob tests were the last tests where the Desert Rock exercises took place and included some of the first underground testing of nuclear weapons.

Below, we offer readers one soldier’s experience witnessing firsthand the Diablo nuclear test, remembered more than sixty years after the blast. Born in 1932 in Ephraim, Utah, Russ Fjeldsted served in the military and in various public capacities, including one term as the mayor of Logan between 1990 and 1994. He lives in Logan, where he owned and operated The Sportsman on Main Street for thirty-seven years. Where appropriate, we have supplemented Lieutenant Fjelsted’s recollection with additional information. See the end of the post for sources consulted for this introductory note.

What if you were invited to the biggest fireworks display in the world? On July 15, 1957, I was invited (required) to attend an atomic weapon experiment at Rabbit Flats, Nevada, a military experiment station in the vast Nevada desert. The experiment was codified “Diablo” and was the last above-ground nuclear weapon test before the military was forced to go underground to test atomic weapons.[1]

After graduation from the “U” in 1954, with a commission in the USAF, I was assigned to the Strategic Air Command as a 2nd Lieutenant, and ordered to Homestead Air Force base in South Florida. Homestead AFB was known as the country club of the Air Force. About 20 miles south of Miami, high ranking military officers and elected officials frequently arranged meetings and conferences there as break from winters cold, miserable duty up north. Our commanding officer was General Curtis Le May, a brilliant “Patton” like career Air Force officer. The Strategic Air Command, under his authority during this period of the cold war, was to annihilate Russian missile bases if the Soviets threatened to destroy our country with long-range atomic warhead missiles. Le May had been appointed by President Dwight Eisenhower to hold Russian Premier Khrushchev’s “feet to the fire”—which he did.

My job was to prepare crews to decontaminate (wash down) and clean up our aircraft (B-47’s and 52’s), which theoretically had flown bombing missions over Russian cities, dropped nuclear weapons, and were homing to return to our bases in Turkey, North Africa, and Spain for decontamination. These aircraft would presumably be covered with atomic fallout, dust, grit, water, and so on from the atomic mushroom clouds encountered flying home from their bomb runs. This threat to the Soviets kept them from “world domination” during the 1960s and 70s.

Our “Diablo” training camp was set up at Nellis Air Force Base near Las Vegas. There were about 200 military personnel from our country and our allies assigned to this radiological defense course.[2] After several days of intense instruction on atomic weapons and their deployment, we were bussed to the command site at 4 a.m. and aligned in a 12 foot deep, 4 foot wide trench about 4,000 feet from ground zero. It was pitch dark and cold on that July morning. “Diablo” the weapon was several hundred feet high on top of a steel girder derrick.[3] It had a blinking red light on top as a reference point. The surrounding area was fenced off for several miles and patrolled by military police.

We were all fitted with atomic radiation monitors to determine the radiation we would receive during the experiment. Fortunately, the radiation was below any threat to our physical health limit. We were not provided with any protective gear—i.e., coveralls, boots, gloves, helmets, and so on. As we entered the trench, a loud speaker began giving us simple instructions on procedures, which we had previously been briefed on. At 10 seconds before detonation, a countdown would begin and at zero we would experience an enormously bright light, then the earth would shake and rock and roll for a few seconds with a deafening sound. We were told to put our hands over our eyes and bend over in the trench. The light was so brilliant I saw through the spaces between my fingers, through my eyelids and dark glasses, the shoes on the feet of the guy in front of me. Then there was a huge gust of wind blasting over our heads, away from ground zero called a precursor wave. A few seconds later the wind returned, moving toward ground zero, called the post-cursor wave. This all happened in about 5 to 10 seconds.

The loud speaker then announced that we could look up into the sky to observe the fiery radiation. The escalation of the atomic cloud rapidly rose to 40,000 feet over a period of minutes. The cloud was enormous and filled with what could be described as a billion firecrackers all continuously exploding in the 5:00 a.m. early morning sky. Man had again unleashed the power of the Creator with very little concern for the consequences that could affect our enemies or nature.

About 15 to 20 minutes later we were told to leave the trench and proceed to a loading area where we would be bussed back to the command bunker center to check for radiation dosage and a review of the experiment would be presented. After 3 hours of debriefing we were given a carryout breakfast and then bussed to ground zero, right up to the site where the steel derrick had stood. There were the four prongs of the steel girder, 10-foot square, each 12” by 12” at the base, sticking about four feet out of the ground. We checked our radiation devices about 10 feet from the steel girders, and there was very little radiation until you got about 5 feet away, where the radiation was “hot” and dangerous. The sagebrush was completely burned out to about 1300 feet from ground zero in a circle. No earth was disturbed. There was no atomic crater as in early experiments, so this was not classified as a “dirty bomb.” The cloud had disbursed and had spread out over several hundred miles and was barely visible in the afternoon sky.

We were then bussed back to Nellis AFB for clean-up. I showered for about an hour, threw every item of clothing I was wearing in a “hot” bin for burial, then spent the rest of the day in the swimming pool.

The experience was beyond belief, surreal, and amazingly terrifying. It’s been over 62 years since the “Diablo” experiment. I’m delighted that I’m still around to tell of it. If any of the military or civilians who were invited to the experience are still around, let’s have a reunion, but not in Nevada.

[1] Many more tests occurred above ground during the Plumbbob and later nuclear testing operations. However, concern for nuclear testing led to some of the first nuclear testing experiments under ground as part of the Plumbbob test series. The last nuclear atmospheric test (unless one counts the Rollercoaster tests of 1963) conducted by the United States occurred on November 4, 1962. This was the Tightrope test, where the government tested the possibility of using a nuclear missile used intercept another missile, was conducted as part of Operation Fishbowl, which in turn was part of Operation Dominic. See Battlefield of the Cold War; Tom Demerly, “55 Year [sic] Ago The Last U.S. Above-Ground Nuclear Test To Determine The Viability Of An Anti-ICBM Defense System,” The Aviationist, November 6th, 2017, https://theaviationist.com/2017/11/06/55-year-ago-the-last-u-s-above-ground-nuclear-test-to-determine-the-viability-of-an-anti-icbm-defense-system/.